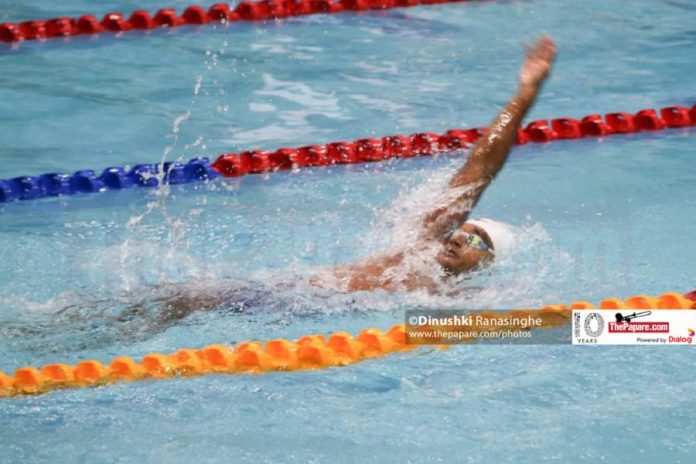 Akalanka Peiris managed to clinch yet another National Record at the 13th South Asian Games as he picked up a Silver medal in the 50m Backstroke event. Sri Lanka took home a further 5 other medals on the penultimate day of the Swimming leg of the Games in Kathmandu.

Peiris, who had already broken 2 other records during the last couple of days in the 100m and 200m Backstroke, showed his prowess in the discipline once again, this time breaking his own record that stood at 25.60s, with a time of 24.95s in the 50m Backstroke. He established the previous record in April of this year. 16-year-old Shevinda De Silva was close behind Peiris, grabbing the Bronze medal.

Sandev Senaratne took to the pool for the Men’s 200m Butterfly event and did not disappoint, speeding through to clinch Silver for Sri Lanka while Ramudi Samarakoon took home her 4th Medal of the Games, with a Bronze in the Women’s 400m Freestyle.

There was much expected from the 4x200m relay teams but unfortunately for Sri Lanka, both the Men’s and Women’s teams could only bag the Silvers, falling behind the dominant Indian teams.

Visakha strikes back to secure primacy