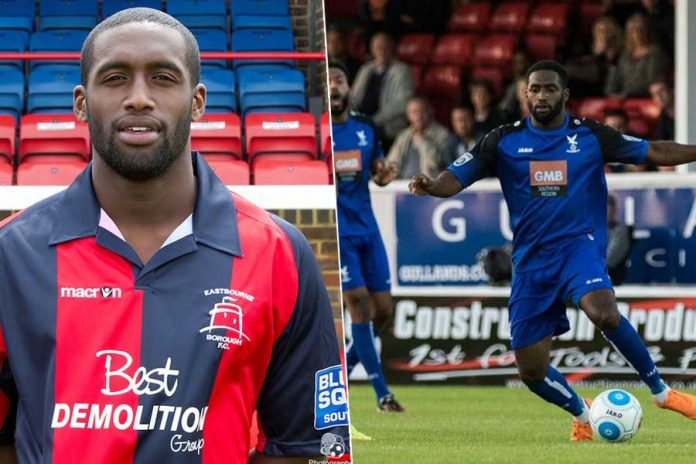 The Football Federation of Sri Lanka (FFSL) recently announced a 31-man pool in preparation for the upcoming FIFA World Cup Qualifier against Macau.

An unfamiliar name on the list took everyone’s notice. Marvin Hamilton from the United Kingdom.

As questions were raised by the football fraternity in Sri Lanka on his inclusion in the 31-man pool for the World Cup Qualifiers, ThePapare.com went about finding more on the man.

Who is Marvin? How did he qualify to play for Sri Lanka?

Born in Leytonstone, England on 8th October 1988, Hamilton qualifies to play for Sri Lanka through his Mother.

“My Mother is a Sri Lankan. Her name is Kumari Silva and she is from Colombo. She moved to the UK to study. My dad did the same from Nigeria. His name is Felix Hamilton,” Marvin spoke exclusively with ThePapare.com.

The 6-foot-tall midfielder currently plays for Eastbourne Borough FC in the National League South in the United Kingdom.

Hamilton began his career with Gillingham FC and has subsequently gone on to play for a number of non-League clubs in the south of England, as well as spending brief spells playing in Cyprus, Australia and the USA. As a junior he trialed out for Arsenal and in 2005 signed as a youth player for Gillingham FC.

“In UK everyone as a kid plays football but I was a late starter. I started playing at the age of 12. A school friend took me to his team called Ridgeway Rovers. Played there for a few years and had a few trials for professional teams here and there including Arsenal.”

“I turned professional at 18. The club I was at was Gillingham FC. I was at Gillingham from 2005-2008 from there I went to play in Cyprus for a team called APEP I stayed for 1 season in the 1st division. After my spell there I came back to the UK and went into a few non-league teams before moving out to Australia for a few months. Came back to the UK again and have been playing in Conference South since. One summer I played in a summer league out in the US for a short time,” he added.

In 2010 Hamilton made a move to APEP (Athletic Football Union Pitsilia) of Cyprus, played 26 games and scored 5 goals in the 1st Division. He joined Eastbourne Borough for the 2012-13 season and played 33 games, subsequently moving out on loan to a couple of other clubs.

Hamilton then had a brief spell playing in Australia, first in the Victoria Premier for Southern Stars before moving to Albany Creek in the Brisbane Premier League. After a trial at Chelmsford City, Hamilton joined Isthmian League club Ware. He played 19 matches for all 3 clubs in Australia and scored 10 goals.

He returned to his parent club Eastbourne for the 2014-15 season playing 35 games. His loan spells continued and now he’s with the club he has had the most success.

He has also pursued his coaching career while playing professional.

“I did my UEFA B license in 2015 and I have been coaching ever since I came back from Cyprus. I’ve spent most my time coaching with one of my first coaches Danny Bailey who has also helped me through my career in football.”

He was on a holiday last year to Sri Lanka and found out about the interest here for football.

“I visited Sri Lanka with my family last year and got in touch with the authorities and we have been speaking throughout the year to see what kind of opportunity we can come to. I wasn’t sure if I was eligible to represent Sri Lanka and I didn’t think they were interested in football.

But now I can see they are. I’m hoping to make as many appearances as I can and to help the National Team be recognized in the World of Football,” an enthusiastic Hamilton added.

Currently with the National Team in Qatar preparing for the World Cup Qualifier, Hamilton is hopeful he will get his International Cap against Macau.

“I travelled late but I’m here in Qatar with the team now. If we can get my dual citizenship in time, then I’m hoping to be involved in the World Cup Qualifiers. So, fingers crossed.”