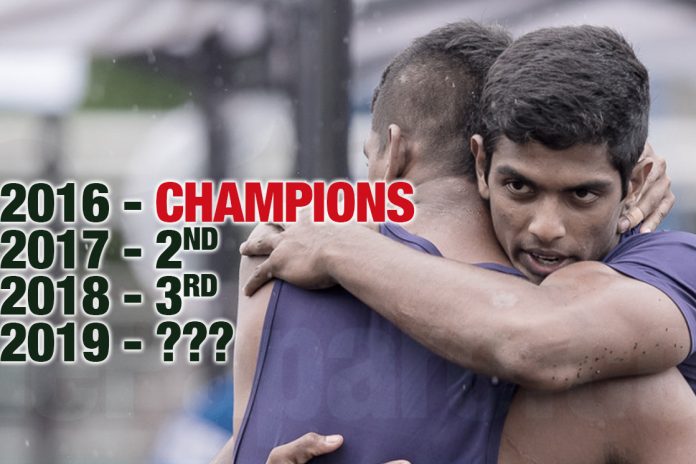 With less than a month to go for the Asia Rugby Under 20 7’s series 2019, Sri Lanka Rugby is stuck in an infinite loop between ownership, authority and representation that will see the country’s chances of making the tournament almost impossible.

The Asia Under 20 Series has been Sri Lanka’s favourite playground ever since the country emerged victorious in the 2016 edition of the tournament under the captaincy of Kevin Dixon.

The series win to-date is the country’s highest-ever honour in the Asian circuit in its long history and from the success story of 2016, the teams that have followed have lived up to the high expectations.

In 2017, the side became runners up and later in 2018 were third-place finishers giving a clear indication that there’s more to the country’s junior set up with ample talent coming up through the schools’ circuit.

In fact, the under 20 series acts as a yardstick for national selection with players such as Naveen Henakankanamage and Dinuk Amerasinghe finding their national numbers following the conclusion of the under 20 tournament.

This year’s tournament is set to be played on the 23rd and 24th of August in Vientiane, Laos but the national body has shown little interest in preparing for the event.

ICYMI: Who will make the cut for the Asia Rugby U20 Sevens?

“Last year when we had our AGM, we decided that all the junior national tournament funding will have to be met by the schools committee (the SLSRFA) since we (Sri Lanka Rugby) do not have the resources to fund the junior teams” added Lasitha Gunaratne, President of Sri Lanka Rugby on the pertaining matter.

In the recent past, Sri Lanka junior teams have participated in 4 major tournaments. The Under 18 Asia Schools 7’s series was one tournament that Sri Lanka took part in 2016 and emerged 3rd (Plate winners).

Later that same year in Chinese Taipei, an under 18 team led by Naveen Henakankanamage became champions in the Asia Under 18 7’series. That same year, Sri Lanka also clinched the Asia Under 20 Sevens series despite losing the final of the 2nd leg.

The other tournament that the country has participated in has been the Asia Under 18 Girls’ 7’s, in which fortune had not turned Sri Lanka’s way.

“There is no question about talent” Lasitha admits. “It is just that our (SLR) national budget itself is beyond measure since we have a fifteens and a sevens programme running and it is not enough for that as well”

“In 2017, we have spent over 17 million on junior tours and it has been questioned by the auditor general as to why we are spending without a sponsor.”

“If we continue like this we will collapse one day very soon.”

Every tournament under the purview of Asia Rugby has a deadline that each local body needs to abide by in submitting their entry to a competition. Failing to submit before the due date will result in no representation while submitting and not participating has more severe consequences.

“We have been giving the schools association reminders on the dates for submitting. If we submit and do not participate, there is  $10,000 fine on the union” Gunaratne added.

The President of the Sri Lanka Rugby Football Association (SLSRFA) Ranjith Chandrasekara, however, refutes the statements made by the national body and claims that their reasoning is unethical.

“If the governing body for the country is Sri Lanka Rugby and the coaches are appointed by them with the team selection and the manager, I don’t see a point how we need to get involved in it”

“If a national under 19 cricket team is on tour, the sponsorship and all of the organization is handled by the national body which is Sri Lanka Cricket, not the schools’ cricket association.”