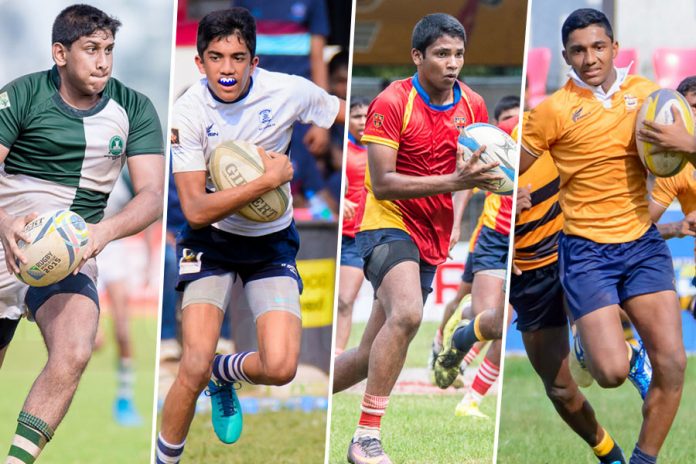 The training grounds where the future Rugby stars are born, the U16 tournament, originally held as a 2-day tournament took a massive turn this season. At the start of the season the officials of schools Rugby, the SLSRFA, decided to play the junior games parallel to the first XV matches. The tournament hence started, has come a long way, to end with two teams crowned champions.

Prior to the senior teams, the juniors kicked off on the 3rd of March, with Royal taking on the Kingswood juniors from Kandy. However, the points table at the end of the first round was somewhat different from the senior table, with some junior teams staying up in the Cup division while their senior teams were relegated to the Plate division.

All in all, it has been a thrilling season so far, how have the teams fared till the end of the first round? Who will be happy or disappointed with the way things have gone and who can be optimistic going into the friendlies?

Royal were in full throttle this season winning their games quite convincingly and in brutal fashion. What really makes them the best of the best is their ability to chase a game and win when the opponents have run away with a short blitz of brilliance. In the process, Royal had managed not conceded a try in their four opening games of the league; they finally did so in the very last game where Trinity gave them a run for their money. To show their quality in what was arguably the match of the U16 league, they came back to win by a mere conversion 21-19. Royal maintained their unbeaten record, after drubbing Kingswood and Anthony’s, opponents they are suited to playing against, forcing mistakes and feeding off them. Accordingly, they were were named the Group Champions and will be awarded the trophy for Segment 1A.

Joes can consider themselves unfortunate to not have won or drawn the cliffhanger at Havelock Park against Royal. Joes have only themselves to blame as the winning try came courtesy of a rather loose pass resulting in an interception try. Leading up to the defeat, they thumped the Kingswoodians by a margin of 61 points to nil. It is finally clicking for the junior Joes and all credit should go to the management for the work they’ve done. This season has been a massive improvement comparing to the previous seasons when they ended up in the Plate segment. They have managed to lay claim to the runners-up tag.

A chance of some resurgence still exists for the Red Gold and Blue with a third spot finish in the points table. Trinity managed to slip twice against Joseph’s and Royal rather disappointingly missing out on their basics.

At times, they have been a joy to watch, mainly because of their lethal backs running the full length of the field to score out-standing tries. At times their defence opens up for the opposition to run the length, making this the area they need to improve on the most.

St. Anthony’s and S.Thomas’ slipped to late narrow defeats in three of their four matches, the tug of war between the two sides ended in favour of the Thomians 14-10. Thus, with that win S. Thomas’ went one up against St. Anthony’s finishing fourth and fifth respectively. Kingswood on the other hand has the worst aggregate for the most points scored against them as all teams have run past, around and through them, to score tries at will. This is mainly because most of their key players are currently involved with the first XV, showing signs of a bright future for the lads from Randles Hill.

As per the points table, Royal won the segment 1A trophy while St. Joseph’s, Trinity and S. Thomas’ secured the top four spots and St. Anthony’s and Kingswood were the unlucky teams to have to miss out at 5th and 6th. 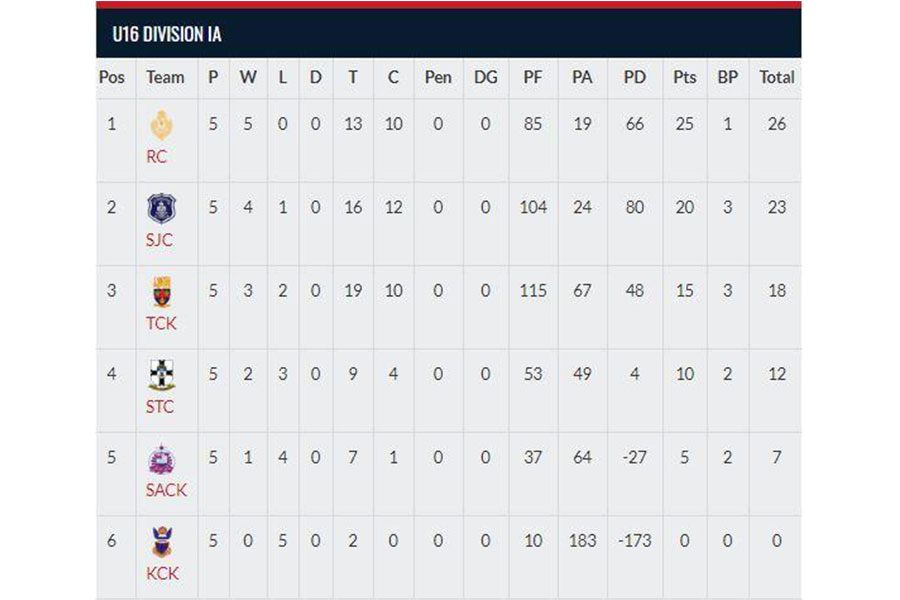 Taking a look at the Division 1B segment, Isipathana, the defending U-16 champions have excelled yet again and have a top finish in the group with 4 wins going on to win the Segment 1B trophy as their reward. After a slow start to the season against D.S.Senanayake, the team has put in so much effort in terms of both defence and attack, scoring at crucial moments and holding their nerve when their backs have been up against the wall. Despite failing to fire on all cylinders against the Peterites mid-way through the season, Isipathana still managed to give the Havelock Park crowd value for their money and secure top spot.

From St. Peter’s point of view, the season has been a total roller coaster. After having won convincingly against the Rajans and Zahira at Police Park in the opening matches, they managed a comeback to draw against Wesley hence dampening their hopes in the race for the top spot with Isipathana. However, the Peterites reached their tournament high beating the group favourites, defying all odds stacked up against them in a must win game, only to have all that glory crumble down against DS, losing 10-5, letting go of the top spot.

Wesley, D.S.Senanayake and Dharmaraja never ceased to amaze the crowds when they stepped into the rugby field and brought excitement in the group.

Dharmaraja got the better of Zahira and secured a draw against DS, the more favoured Wesleyites drew against the Peterites and lost to top seed Isipathana 07 nil. D.S.Senanayake went further one up to take down Peter’s, pulling them down to the second spot in the points table. Zahira was the only disappointment, losing out to all the teams slipping the furthest to the bottom of the table.

As per the points table, Isipathana, Peter’s, Wesley and D.S.Senanayake secured the top four spots whilst Dharmaraja and Zahira were the unlucky teams to have to miss out at 5th and 6th. 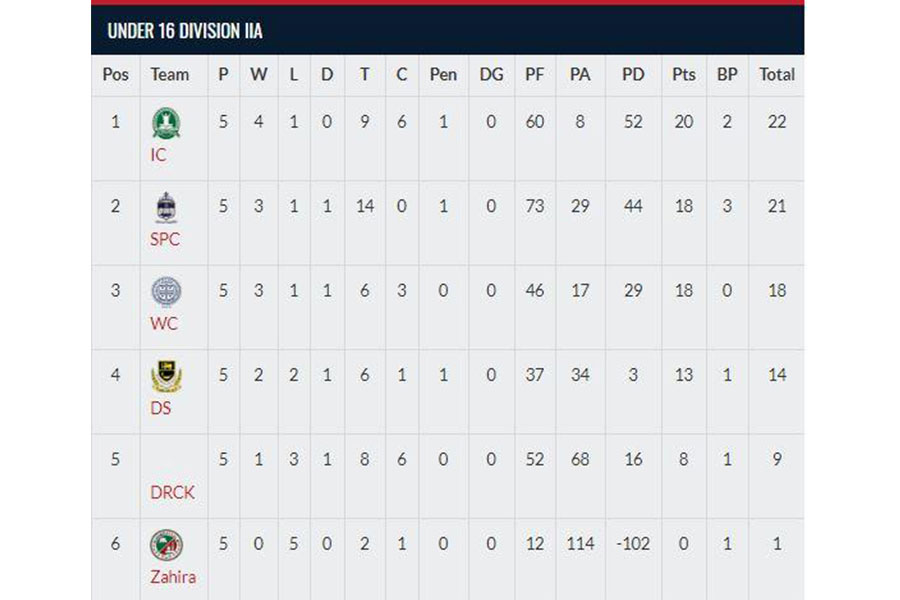 The tournament has come to an end, but the teams will continue their season, engaging in friendlies alongside their first XV teams.

Seven of the Best: Dream Team of the Schools’ Sevens