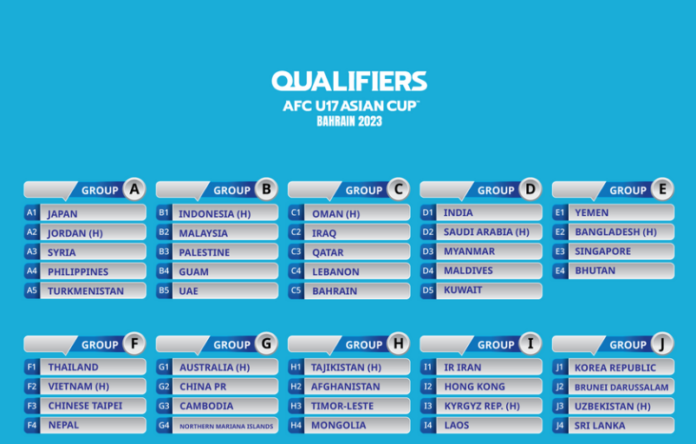 The qualifying cast for the AFC U17 Asian Cup Bahrain 2023 Qualifiers was finalised at the draw held in Kuala Lampur.

A total of 44 participating Member Associations (MAs) were divided into 10 centralised qualifying groups, six of which will feature four teams, while four groups will include five sides when the Qualifiers take place from October 1 to 9, 2022.

Sri Lanka have been drawn in Group J, which will be hosted by Uzbekistan, alongside two-time winners Korea Republic and Brunei Darussalam.

Defending champions Japan, who have won the title three times, were drawn in Group A alongside hosts Jordan, Syria, Philippines and Turkmenistan. Group B will feature hosts Indonesia, Malaysia, Palestine, Guam and UAE.

Oman will host Iraq, Qatar, Lebanon and Bahrain in Group C. Bahrain have already qualified as hosts and their results will not be considered during the qualifiers. Two-time champions Saudi Arabia – who will host Group D – were drawn alongside India, Myanmar, Maldives and Kuwait.

China PR, winners of the tournament in 1992 and 2004, will have Cambodia, Northern Mariana Islands and three-time semi-finalists Australia – the hosts – for company in Group G. Tajikistan, runners-up in 2018, will host Afghanistan, Timor-Leste and Mongolia in Group H.

Islamic Republic of Iran, Hong Kong, hosts Kyrgyz Republic and Laos were drawn in Group I.

The 10 group winners and five best second-placed teams will join Bahrain in the Finals.