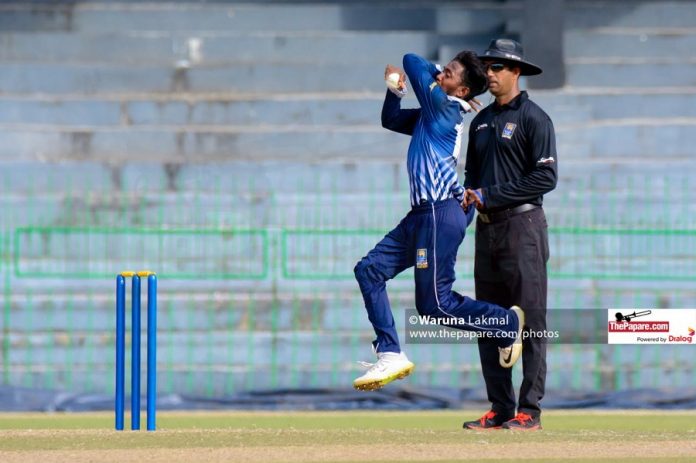 Six matches of the SLC Major T20 Tournament 2019 concluded today. Off-spinner Akila Dananjaya picked up 4 wickets for 17 runs against Negombo CC with his remodeled bowling action to register a win for his team.

Galle Cricket Club recorded a comprehensive victory over Badureliya Sports Club in their Group D fixture which concluded today at the CCC Grounds in Colombo. After being put into bat first, Galle CC posted 147 runs for 6 wickets in the allotted 20 overs. Harsha Vithana (42) and Rajeewa Weerasinghe (35) top scored with the bat for the visitors.

Right arm speedster Nuwan Thushara known as ‘Podi Malinga’ picked up 2 wickets for 21 runs for Badureliya. In reply, Badureliya batsmen were bundled out for just 83 runs in 16.3 overs. Lakshan Rodrigo was the pick of the bowlers for Galle as he took 4 scalps sparing just 12 runs.

Priyamal Perera’s efforts with the bat and Akila Dananjaya’s magical spell with the ball helped Colts Cricket Club register a 53-run victory over Negombo Cricket Club in their Group B fixture which concluded today at the Police Park Grounds in Colombo.

Nondescripts Cricket Club registered a comprehensive victory over Bloomfield Cricket Club in their Group A fixture which concluded today at the BRC Grounds in Colombo. Left handed stroke maker Mahela Udawatta top scored with an unbeaten 57 runs for NCC.

Dinesh Chandimal, who had been asked to play first class cricket to regain his form, scored an unbeaten 41 runs. Bloomfield batsmen were never in the run chase as they made only 125 runs for 5 wickets in the allotted 20 overs.

Saracens Sports Club managed to record an 18-run victory over Panadura Sports Club in their Group A fixture which was worked off today at Panagoda. Saliya Saman showed his all-round skills scoring 25 runs with the bat and picking up a 5-wicket haul with the ball for Saracens.

Air Force Sports Club defeated Kurunegala Youth Cricket Club by 49 runs in their Group C fixture which concluded today at Katunayake. After being put into bat first, Air Force made 176 for 6 in the allotted 20 overs. In reply, the Kurunegala lads posted only 127 runs as Umega Chathuranga starred with the ball picking up 4 wickets for just 10 runs for Air Force.

Army Sports Club managed to record a 90-run victory over Navy Sports Club in their Group C fixture which concluded today at the Bloomfield Grounds. National cap, Seekuge Prasanna showed his tricks with the ball picking up 3 wickets for 19 runs for the soldiers.