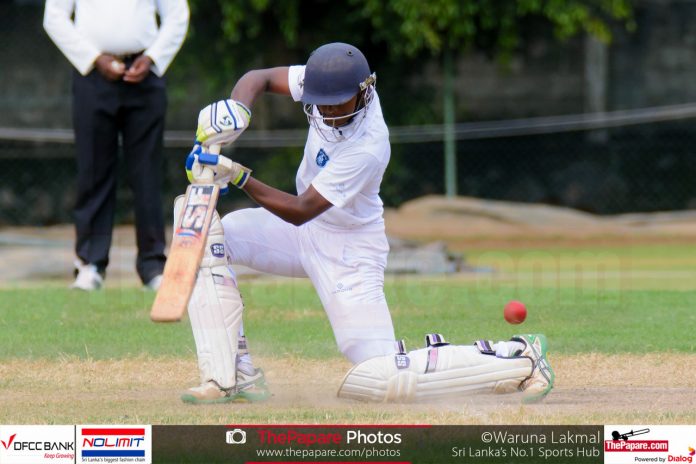 Group ‘A’ game between St. Joseph’s and Maliyadeva concluded today at Darley Road after two days of dominance from the Joes. After winning the toss, St. Joseph’s decided to bat first. Young Shevon Daniel led the batting for Joes with his maiden ton escalating them to a humongous 341 runs. Sheran Fonseka added an elegant 81 runs to the total while Miranga Wickramage contributed with an unbeaten 61 runs. Pasindu Thennakoon picked up 5 wickets for 95 runs.

Maliyadeva College posted a 212 runs for their first innings in reply. Nisanjaya Hettiarachchi scored a well-made 73 while Salinda Senevirathna bagged a five-wicket haul.

Coming out to bat in their second innings, in the final session of the day, St. Joseph’s scored 40 runs for the loss of a wicket in 10 overs. The game thus ended as a draw earning St. Joseph’s the first-innings points.

Several games of the Singer U19 Cricket Tournament got underway today (19th October) all around the island while….

Zahira College played De Mazenod at Zahira College grounds in a group ‘B’ fixture. De Mazenod College, who were put to bat first by Zahira, scored a modest 180 for their first innings. Sasindu Sasanka top-scored for Mazenod with 45 runs while M Kahaled was the pick of the bowlers for his 3 for 26.

In reply, Zahira College batted for the rest of the game going past De Mazenod’s first innings total and finishing at 207/7. Dilsara Saminda scored 77 runs while M.L. Salsa contributed with 61 runs. Romal Fernando picked up 4 wickets for 35 runs.

In the group ‘D’ game between Richmond College and Ananda College, Ananda College won the toss and elected to field first. Richmond College scored a comfortable 277 for their first innings for the loss 8 wickets and declared their innings. Adithya Siriwardena’s 55 was the most by the batsmen from Richmond while Janidhu Jayawardena topped the bowling chart with a fifer.

In reply, Ananda College struggled against some quality spin from the Richmondites and rattled in the first innings for just 110 runs. Kamesh Nirmal led the batting for Ananda with a fighting 56. Amshi de Silva picked up 4 for 35 while Kalpa Nethsara and Dilum Sudeera both picked up 3 wickets each. Being forced to follow-on Ananda was at 52 for 3 by the close of play.

A couple of games of the Singer U19 Division I Cricket Tournament concluded today (17th of October 2018). St. Sebastian’s….

St. Benedict’s won the toss and elected to bat first in the traditional fixture against Wesley College which was worked off at Campbell Park. By the end of day one, the Bens were at 174 runs for the loss of 7 wickets and that was the all the play which was possible in the game as day two was completely washed away. Shehan Fernando top-scored for the Bens with 48 runs while Maheesh Theekshana made an unbeaten 40. Denuwan Mendis, Sidath Darmasiriwardena and Movin Subasinghe all bagged 2 wickets each.