Dominant Sri Lanka completed a clean sweep of all trophies in Bangladesh as they won the second and final T20I by 75 runs in Sylhet on Sunday to clinch the T20I series, 2-0.

After a record breaking chase in the first match by Sri Lanka, Bangladesh asked the visitors to bat first, keeping in mind the dew later in the night.

The Sri Lankan opening batsman Kusal Mendis’ blazing 70 at the top of the order laid a perfect foundation as they posted 210 for 4 and then produced a clinical bowling performance to restrict the home team to just 135 runs.

Earlier, the visitors rode on a 98-run opening stand between Mendis and Danushka Gunathilaka. The left-hand and right-hand combination looked at ease punishing the Bangladeshi bowlers to all parts of the ground.

Gunathilaka struck 2 sixes and 3 fours during his 37-ball 42 before falling in the 11th over. Thisara Perera was given the license to keep up the scoring rate at number three. Perera joined Mendis and they added 51 to put Sri Lanka in the box seat.

Perera made 31 off 17 balls with 3 fours and a six while Mendis, who hit six fours and three sixes, reached his second successive fifty and a career-best T20 score.

Upul Tharanga made a 13-ball 25, and Dasun Shanaka, smashed an unbeaten 30 off 11 balls with 5 fours and a six to lift the score past the 200-run mark as Sri Lanka accumulated 119 runs in the final 10 overs.

Chasing a daunting 211-run target in their first T20I at Sylhet, Bangladesh played too many rash strokes and showed no clear strategy or plan as they were decimated by the Lankan bowlers.

Akila Dananjaya started off the collapse when Soumya Sarkar top edged to extra cover while Shehan Madushanka dismissed Mushfiqur Rahim with a bouncer and Mohammed Mithoon with a length delivery as Bangladesh were reeling at 22 for 3.

Madushanka limped off the field after delivering the first ball of his 3rd over but the visitors had plenty of bowling options up their sleeve as the strangle hold continued with the introduction of debutant Amila Aponso and veteran Jeewan Mendis to the attack.

Bangladesh continued to lose wickets as Tamim Iqbal skied an Aponso slider while Ariful Haque was struck plumb in front by leg-spinner Mendis.

Skipper Mahamadullah and Mohammed Saiffudin constructed a 42-run stand for the 6th wicket but a mix-up in the middle ended the hopes for the home team.

The lower order was no match for the Sri Lankan bowlers as they registered their third highest victory in T20I in terms of run margin.

Sri Lanka started off the tour losing the first couple of games in the ODI tri-series but then bounced back to win that trophy, then won the Test series, and have now swept the T20I series in the first assignment for new head coach Chandika Hathurusingha.

“Mendis grabbed his opportunity with both hands. It’s been a really good series as a team. We didn’t play as a team, we played as a family. Everyone put their heart and soul in practice. Been a tough last couple of years. This is a really good start to the new year. We got really good combination with youngsters and seniors.” Skipper Dinesh Chandimal said at the post-match presentation ceremony. 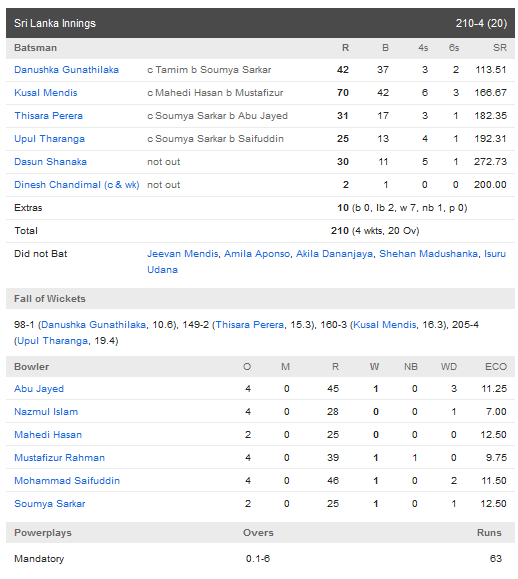 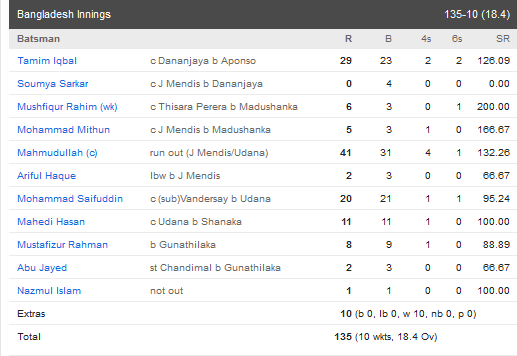 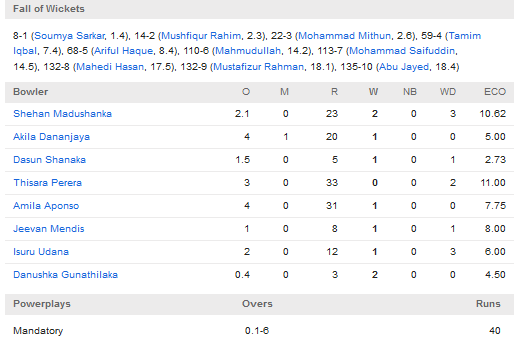 Confident Joes aim big in 84th Battle of the Saints