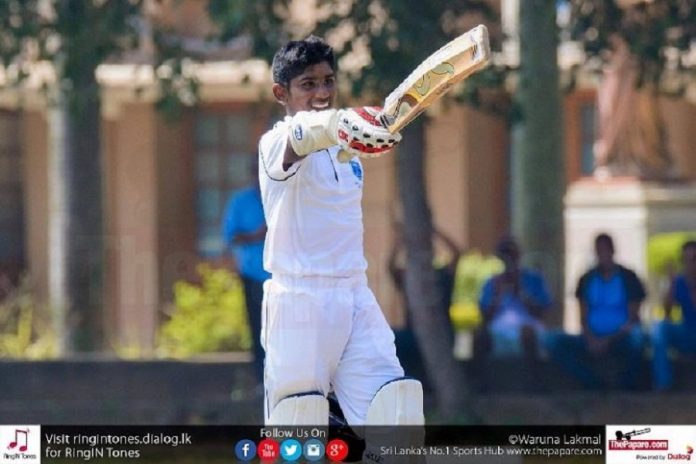 Several games of the Singer U19 Cricket Tournament got underway today (19th October) all around the island while three games which began yesterday were concluded.

Moratuwa Vidyalaya won the toss and elected to put runs on board yesterday. They posted 225-runs for their first innings in which, Sri Lanka youth player, Nishan Madushka shined with his second ton of the season. Ravindu Fernando bagged 4 wickets for 64 runs while Pramod Fernando and Pasindu Ushetti both picked 2 scalps each.

Then the right-arm seamer from Moratu Vidyalaya, Niraj Kavishka, decided to take the center-stage as he ran through the Maris Stella line-up in no time. Niraj picked up 6 wickets for just 2 runs including a hat-trick to leave Maris Stella absolutely stranded in the game. Maris Stella were ripped off for just 25 runs. Nadith Nishendra picked up 3 wicket for 25 runs.

Maris Stella tried to work on salvation but failed as Eran Hansamal decided to take his toll out of Maris Stella. Hansamal picked up 7 wickets for 48 runs as Maris Stella only managed 159 runs in their follow on. Chathura Anuradha and Kevin Perera both hit 37 runs each while Rashan Kavishka accounted for 2 wickets. Moratu Vidyalaya won the game by an innings and 41 runs.

Shevon Daniel; The player for all seasons

Cricket has always been a sport which, over the years, has seen many players defy the age factor, to shine

Joseph Vaz managed only a 106 runs for their first innings after being put to bat first by St. Thomas’ Matara. Avindu Shehara topped the batting chart with 46 runs to his name while Hirusha Jeewajith was the star with the ball bagging a fifer for 23 runs.

Coming out to the crease once again, Joseph Vaz batsmen added another 173 to their tally. Chamod Kavishka’s 57 runs was the best of the innings while Gisathika Jayaweera also bagged another five-wicket haul. The match was then brought to a draw.

Thurstan was put to bat first by Trinity in the group ‘D’ fixture between the two teams. Accordingly, Thurstan piled up a huge 319-runs on the board. Yohan Liyanage batted beautifully for his 85 runs while Avishka Kaushalya and Ranesh Silva both contributed with 40-plus scores. Kavishka Senadeera was the pick of the bowlers for his 4 for 91.

In Trinity’s reply, they struggled against a very strong Thurstan bowling unit and eventually were wrapped up for 150 runs. Thurstan enforced the follow-on and once again Trinity were in a spot of bother at 165 for 8 when the game was called a draw. Dinitha Siriwardena’s 36 not out was the pick of the batting while Ayesh Harshana picked up a five-wicket haul.

Following the home defeat by Maris Stella last week, St. Joseph’s has bounced back strongly as they went on to record a massive 341 runs for the first innings. Fresher Shevon Daniel broke into the scene with a bang as he made his maiden century in just his second game. Shevon is the younger brother of the Sri Lanka U19 star, Jehan Daniel. The youngster has been sensational throughout in Under 13 and 15 level cricket. Sheran Fonseka also scored a well-made 83 while Miranga Wickramage made an unbeaten 61.

Maliyadeva were lacking behind at the close play with 28 runs on the board for 2 wickets.

Wesley College played against St.Benedict’s in their traditional encounter at Campbell Park. They won the toss and elected to bat first. Benedict’s were in a convincing position by the end of the innings at 174 for 7 with Maheesh Theekshana at the crease on 41. Shehan Fernando scored 48 runs while Denuwan Mendis, Sidath Darmasiriwardena and Movin Subasinghe all had picked up 2 wickets each by close of play.

The first round game between De Mazenod College, Kandana and Zahira College is being worked off at the Zahira College Grounds, Maradana. The hosts invited De Mazenod to bat first after winning the toss. De Mazenod batsmen failed to put up a good show as they managed only 180 runs in their first innings. Sasindu Sasanka scored 45 runs while M Kahaled picked up 3 wickets for 26 runs.

At the close of play Zahira were at 27 runs for the loss of 2 wickets.

Another game of Singer U19 Division I Tournament between Richmond and Ananda is being played at Mahinda Rajapakshe International Stadium, Hambantota. Batting first, Richmond College comfortably posted 277 run on the board for the loss of 8 wickets. Aadithya Siriwardena and Vimud Sankalpa hit half-centuries. Janidhu Jayawardena picked up a five-wicket haul.

Ananda were at 31 for 2 at the close of play. The game will resume tomorrow for day 2.