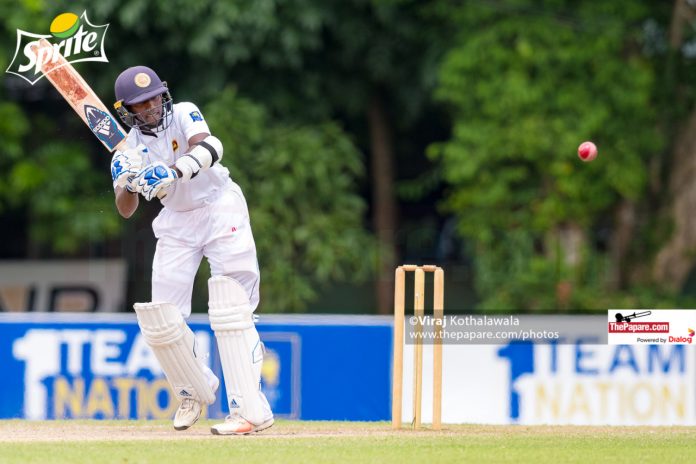 Moratu Vidyalaya won the toss and opted to bat first in their traditional fixture against Maris Stella College, Negombo. The U19 star from Moratu Vidyalaya, Nishan Madushka, carried his blistering form, from the games in Youth Asia Cup and the India’s tour of Sri Lanka, into the school scene. He made an elegant 121 runs up-front to propel Moratu Vidyalaya to 225 runs in their first innings.

Then came another silent assassinator from Moratuwa, Niraj Kavishka who bagged a stunning 6 wickets for just 2 runs, including a hat-trick leaving Maris Stella bewildered at 25 all out. The follow on was enforced and Maris Stella made an immediate recovery as they were at 90 for 2 at close of play.

Sri Lanka U19 cap Nishan Madushka scored a brilliant unbeaten century to save his school, Moratuwa Maha Vidyalaya in….

Being put to bat first by the opposition skipper who won the toss, St. Joseph Vaz faced a bit of struggle with the bat as they managed only 106 runs for their first innings. Avindu Shehara topped the batting chart with 46 runs. Hirusha Jeewajith was impressive with the ball and bagged a five-wicket haul.

In reply, St. Thomas’ were trailing at 80 for 5 by the end of the day. Harindha Jayasekara scored 31 while Avindu Thehara picked up 2 for 13. The game will resume tomorrow for day 2.

A couple of games of the Singer U19 Division I Cricket Tournament concluded today (17th of October 2018). St. Sebastian’s….

Thurstan posted a massive 319 runs for their first innings, after being asked to bat first by Trinity who won the toss. Yohan Liyanage top-scored with 85 runs to his name while Kavishka Senadeera picked up 4 wickets for 91 runs.