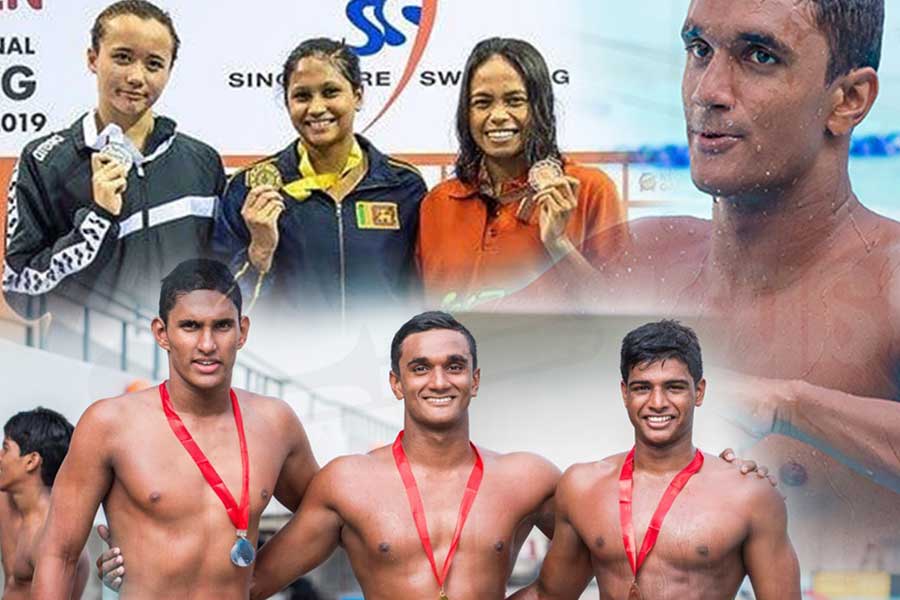 Five of the 15 swimmers representing Sri Lanka Swimming have swum up 3  medals overall at the 15th Singapore National Swimming Championship 2019.

Sri Lanka fielded 15 swimmers for the 2019 Singapore National Swimming Championship which kicked off on the 19th June.

In the Men’s 200m Backstroke event, Kavindra Nugawela qualified for the final with a preliminary time of 2:13.59 minutes. In the final, he was 2 seconds behind the front runners who clocked in times at 2:10 + minutes, whereas Nugawela clock in 2:12.70min to grab 3rd place in the B Final.

Cherantha De Silva won the Bronze place in the B Final of the Men’s 100m Butterfly event.  His final lap was a close battle between Supriya Mandal and Wine Wongchareon who won second and first places respectively. Eventually, De Silva settled for Bronze with a time of 54.77second on the clock.

The last of the tournament came from Ramudi Samarakoon of Sri Lanka as she bested 7 other top swimmers behind her to win Bronze in the Women’s 50m Breaststroke event. With a qualifying time of 35.53 seconds and a final time of 35. 50 seconds, Samarakoon will be content with her performance at this year’s Championship.

Ganga Seneviratne competed in the Women’s 100m Backstroke event and won 3rd place in the B Final. She swam a 1:08.54min lap in the preliminaries and finished off with a timing of 1:0758min in the final swim off.

In the same event, the 100m Back, Sri Lanka alumni Kimiko Raheem won Gold in the A Final with a final timing of 1:04.10min. Her qualification timing was clocked at 1:04.62. This first-place finish has won Raheem 740 FINA points which will be a major boon into earning her spot in the FINA World Championship later this year.

Sri Lanka’s Akalanka Peiris swam the Men’s 100m Backstroke event and secured a third place in the A Final. His preliminary timing was at 59.40sec and swam a 57.93sec lap in the finals to win Sri Lanka a Bronze.

Meanwhile, Kaveen Weerasinghe found the 18th place in the Men’s 800m Freestyle event with a final timing of 9:1360sec.