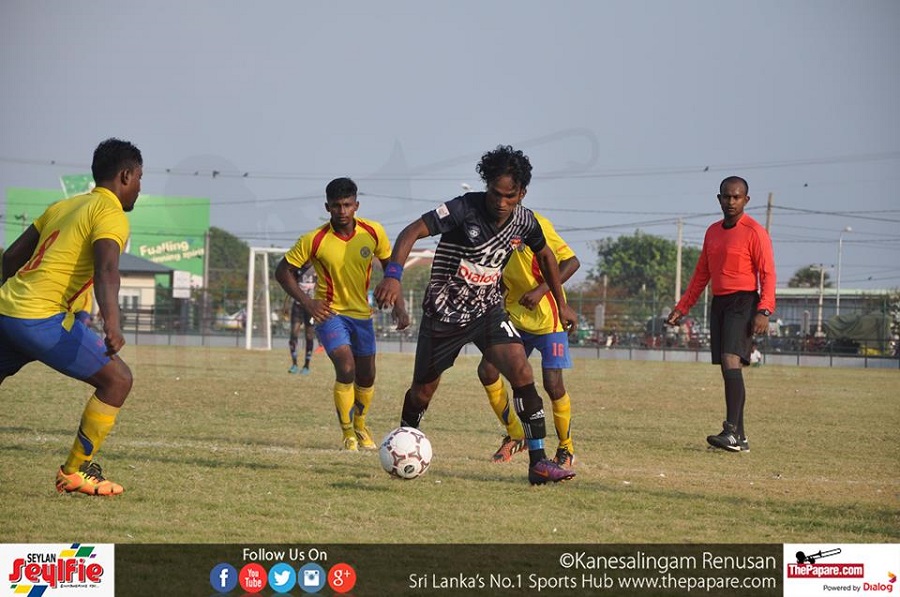 One of Jaffna’s elite teams Singing Fish SC bid farewell to the 2016/17 FA Cup as they suffered defeat at the hands of Blue Star SC who sustained immense pressure throughout the game to withhold their narrow 2-1 lead away from home at Durayappah Stadium, Jaffna.

Singing Fish SC had an impressive track record in the tournament and their recent win came against a strong Police side in a 4-1 penalty shoot-out. One of the favourites in the tournament Blue Star SC beat Leo SC 3-0 in their corresponding fixture.

Blue Star SC in a performance to forget managed to labour past Leo SC 3-0 in a 4th round FA Cup..

Blue Star started the game strong as many would have expected.  Star player E.B.Channa’s stunning strike hit the bar in the early minutes. Within a few minutes, Channa again whipped the ball inside the box for Sanjeewa Seemon to head it in but Singing Fish’s experienced goalkeeper Rajkumar brilliantly stopped it.

Though Blue Star enjoyed majority of the possession, Singing Fish kept the territory as they closed down most of the passing lanes to their lone striker Channa, which seemed to be a tactical move from the home side.

Blue Star’s Balagamage Shivanka stopped an effort at the other end. Geethan sent two balls into the box but both were well defended by the visitors. Dineshkumar’s lone effort to carry the ball forward ended up in vein as Seyon wasted the chance.

Blue Star recovered the ball and Tharaka Silva made an effort on goal but Rajkumar, on a busy day at work, had none of it passing him. Defender Shivanka was called for duty too as Geethan and Dineshkanth had two chances within a quick succession.

In the 37th minute, Mohamed Mazeer opened the scoring as he converted a beautifully weighted ball from Channa into the box. The goal scorer had another go before the hosts recovered from going behind – when he rounded Rajkumar but Shanthan made a vital goal-line clearance.

Geethan and Visoth attempted to equalize but the hopes were destroyed by the center defence pair Shivanka and Fahir Ali.

Blue Star started the second half similar to how they had started the first. Dominant display showed as Tharaka Silva took a free kick from the center line and the ball was narrowly wide of the goal. Fahir’s effort from the edge of the penalty box was millimeters above the crossbar.

Gnanapradhap made an unexpected attempt on goal after a quick passing move. Goalkeeper Manjula Fernando was slow to react but he still cleared away for a corner. The corner was wasted again.

Singing Fish SC edged Police SC 4-1 on penalties to book a place in the Round of 16 of the FA Cup..

Complete domination on the park proved fruitful as the second goal came in the 58th minute. Silva’s accurate cross was headed in by Sanjeewa Seemon. Though that effort was stopped, he pounced onto the rebound and kicked the ball in to double the lead.

Following the goal, Singing Fish switched their style of play into a more attacking nature. Geethan from the right sent the ball into the box that couldn’t be reached by the captain but Quinton quickly reacted and converted it into a goal. The crowd overjoyed and the stadium witnessed a big uproar. The atmosphere was electric as the goal was scored.

The crowd started to believe that the home side had a chance in the game and massive support from the stand followed. Geethan who was having a wonderful game crossed another ball in that was cleared for a corner.  Receiving the ball from the corner, Gnanapadhap had another go at the goal that was whiskers away from the bar.

Singing Fish, started to dominate the play, kept the ball in and created opportunities. Blue Star’s Ali made a few vital efforts to protect the lead. The pressure was building and the hosts kept on knocking the door but Ali, was the lone man standing between the hosts and the quarterfinal birth.

“We expected the game to be easier than this. That is why we had to suffer the pressure for too long. Referee allowed an additional minute of play which we are not happy of.”

His opposite number Uthayanan had this to say;

“We wanted to test our standard against Blue Star as we play them for the first time. That is why we were focused on defending in numbers in the first half. We understood their game and created chances in the second. Our forwards are 18 and 19 and they are still raw and learning. We will try to improve our quality in the upcoming fixtures.”

Wenger tells Arsenal not to relax their Euro grip