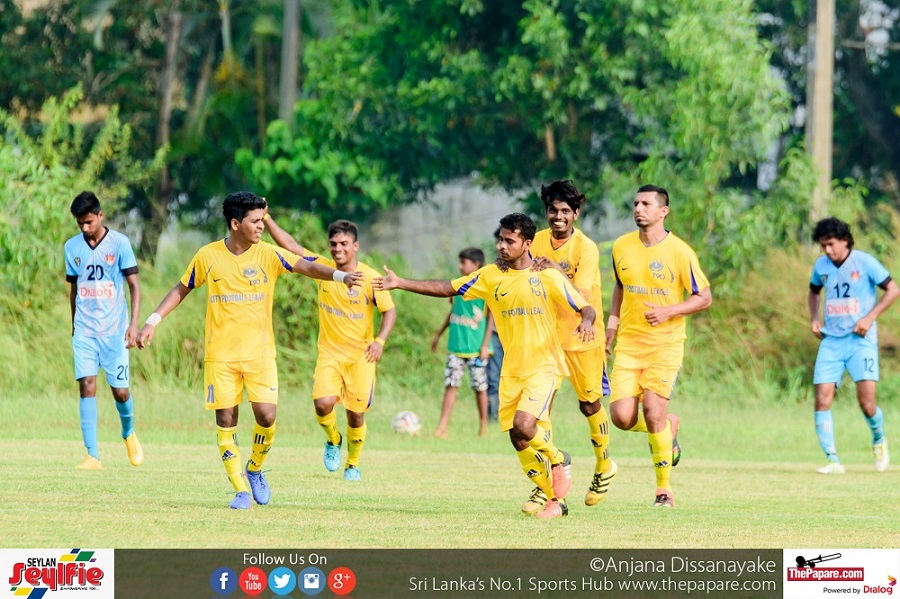 Saunders SC came from 2-0 down within the first 10 minutes of the match to draw 2-2 and eventually win 3-1 on penalties against Negombo Youth SC to book a place in Quarter Finals of the FA Cup played at Kelaniya Football Complex.

Both teams came into the match in some goal scoring form with a whopping 15 goals apiece in their last two games played. Saunders demolished Up Country Lions 6-1 while Negombo Youth thumped Jet Liners scoring 6 goals to nil in the Round of 32 matches.

It took only 4 minutes for Negombo Youth to take the lead. A smooth counter was finished expertly by Priyankara Silva whose thunderous volley settled into the net.

Negombo Youth doubled their lead within 10 minutes when Pradeep Fernando chipped another goal against a telling Saunders defense in the 8th minute.

Saunders was left shell shocked as Negombo Youth attacked from left, right and center. It would have been much worse had Harindra Peiris been able to score from a one on one with the goalkeeper but the former Sri Lanka U19 goalkeeper Mahendran Dinesh saved it with his foot.

Saunders gathered themselves back and pulled one back to keep themselves in contention in the 16th minute. Indreewa Udara finished off a great cross from point blank range.

Saunders goalkeeper was guilty of giving away a penalty when he brought down Priyankara Silva but the he made amends by saving the feeble effort from Silva himself.

After some intense exchanges, both teams tried to score one more goal with the best chance coming to Sanoj Sameera whose effort was stopped by the diving Vimukthi Maduwantha.

Saunders somehow found a way to get back in level terms through a set piece opportunity. Isuru Perera headed Chrishantha Abeysekara’s corner kick back in to the net on the stroke of half time.

Saunders SC dominated the early exchange riding on the momentum which saw them coming back strong at the end of the first half.

Isuru Perera had a similar header opportunity to give his team the lead but he missed the target this time.

In lopsided FA Cup Round of 32 encounters, Negombo Youth and Army SC defeated Jet Liners and Easwaran SC 6-0 and 20-0 respectively.

Negombo Youth fought their way back as they started getting the fair share of possession. Both teams displayed competitive end to end football.

But the match turned on its head when substitute Rajarathnam Minon was given straight red for bringing down Chrishantha Abeysekara just outside the box. Minon did not even last a minute as he got sent off after just coming on. Suntharaj Niresh blasted the resulting free-kick over.

Sniffing blood, Saunders pushed on for the winner. But the resolute Negombo Youth kept the Saunders attackers at bay. Sanoj Sameera unleashed another effort but Maduwantha was up for it again making a full stretched dive to save it.

Saunders had a glorious opportunity to win the match at the stroke of full time but Niresh could not find the target from 10 yards amidst circled defenders and the match progressed for penalties to determine the winners.

Despite all the heroics in the latter stages, Negombo Youth crumbled in the penalties as they missed 3 penalties on the trot. Goal scorer Priyankara Silva was the only one to find the net. Asanka Viraj saved two of the penalties.

On the other hand, Saunders missed a penalty as Indreewa Udara hit his opportunity straight to the goalkeeper but experienced veterans Sajith Dharmapala, Sanoj Sameera and skipper Chanuka Eranga kept their calmness to win the match for the men in yellow.

Speaking to ThePapare.com after the close victory was Saunders SC Coach Sumith Walpola;

“Our players were below par today. We didn’t perform well. But with this weather you can’t expect them to give their best also. Despite the favourable result I am not satisfied. We should have scored 2-3 extra goals. We didn’t worry despite going down by two goals within 10 minutes. We had time and we did that. We have many experienced players with over 10 years of experience. They were the reason for the win today. We brought in Asanka (Viraj) purely for his experience. We didn’t want to burden the young Dinesh.”

Injured Coentrao fears his World Cup is over