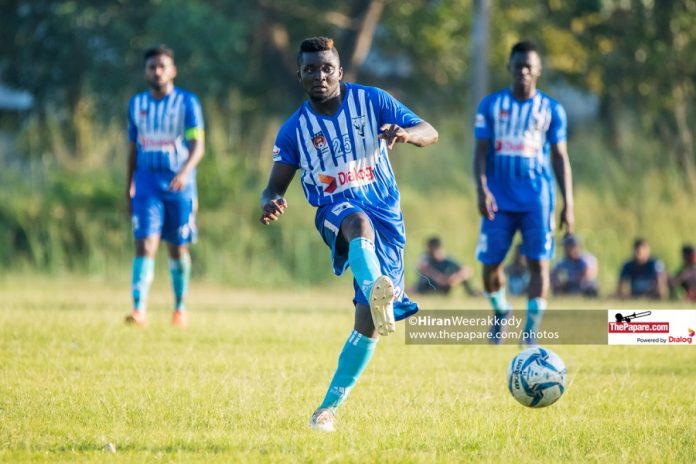 Colombo FC were made to sweat against a resolute New Youngs….

Ratnam SC started off from 9th position in the table while Pelicans were in relegation battle in 15th place – with an equal number of points with five other teams.

Right from the kick off it was Ratnam who were on the front foot with some excellent passing and movement which kept the Pelicans defense busy. For the first 10 minutes Pelicans were not able to come out of their own half.

However, it was Pelicans who had the first shot, Gobbinah Godfred who shot from range with the ball swerving away from goal. It was Godfred who came close to giving the lead to Pelicans as a close-range effort just went wide after some good buildup play on the right flank.

Mohamed Akil came close to giving Ratnam the lead when he made Mohamed Sabri make an error and got clear on goal. His shot was punched away by goalkeeper Mohamed Nathreel.

Midway through the first half, Ratnam made the first substitution as Nimantha Madushan was brought in to replace Pradeep Rodrigo as Pelicans grew into the game and were asking questions of the Ratnam defense.

The pressure piled on and Emmanuel Lartey then gave the team from Kurunegala the lead after he beat the offside trap and went around the goalkeeper to slot home.

Just before the break Sachintha Madurangana equalized for Ratnam with a peach of a free kick from the top of the box. A sublime left foot curler left the Pelicans goalkeeper flat footed.

In the second half Pelicans looked bright, however Sasanka Dilhara sent through a beautiful long ball for Periyasamy Sithirakumar to chase and the youngster beat the experienced defender Henry Appiah and drew a penalty for Ratnam. Abdel Coulibaly stepped up and converted to give the lead to Ratnam.

The game opened up as Pelicans went in search of the equalizer which created space in the back for Ratnam forwards to attack. Sasanka Dilhara and Sithirakumar combined well for Ratnam and Emmanuel Lartey was a constant threat for Pelicans.

On the hour mark Mohamed Nuskan kept the Ratnam’s lead intact as he made a goal line save off a header from K. Sobikaran. As the play moved towards the other end, Sasanka Dilhara missed a clear opportunity to increase the lead for Ratnam.

It was end to end stuff as Emmanuel Lartey skied a chance after good work and a through ball from Godfred.

Pelicans kept pressing for an equalizer which never materialized as Ratnam played smartly for time. In stoppage time Mohamed Akil put the icing on the cake with an individual goal to seal three points for Ratnam SC.