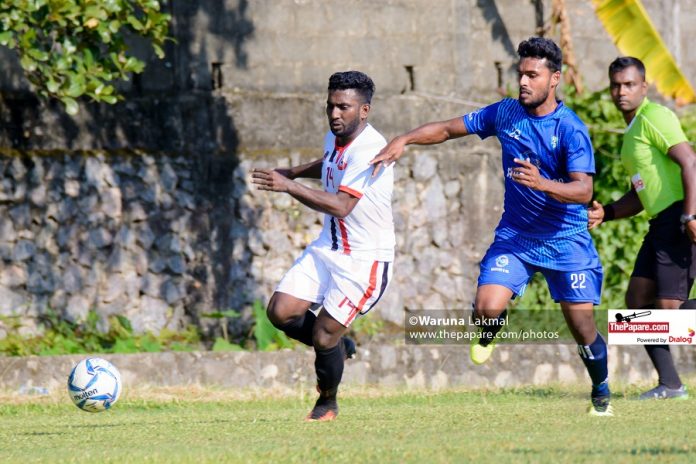 Java Lane SC came from behind with two late goals to beat Negombo Youth FC 2-1, even though Negombo goalkeeper Chinthaka Sujeewa put on a world-class goalkeeping display in their Week 09 fixture of the Dialog Champions League 2018 played at the Kelaniya Football Complex.

Negombo Youth came into this game in 14th place with 6 points, while Java Lane who were having a very poor season were 17th with just 4 points.

Their season’s problems only got worse when the lads from Negombo struck first blood early in the 5th minute. A good cross found Kamal Silva on the far-side of the opposition box before he cut the ball back to Ndedigwe Norbert Chibuzor who smashed it past goalkeeper Ashfaq Ayub from close range to make it 1-0.

Negombo’s skipper Dulaj Peries then created a good opportunity when he struck a free-kick from range into the box that Priyankara Silva did well to get on the end of, but it was still an easy save for Ayub.

Play got quite even midway through the half with Java Lane chasing the equalizer. Negombo meanwhile was content to sit back and use the quick pace of Chibuzor and Priyankara to create fast paced counter-attacks.

The Negombo lads came close again when Ravindu Rishan struck a powerfully driven attempt from the edge of the box, but Ayub reacted quickly and made the save.

Java Lane had the final effort of the half when Mohamed Rizkhan got the ball on the edge of the 15-yard box and struck a shot, but goalkeeper Chinthaka Sujeewa stood tall and pulled off a stunning save.

Java Lane started the second half on the front foot chasing the equalizer and were nearly rewarded in the opening 5 minutes. Rizkhan broke through the defence into the opposition box, but his final attempt came crashing back off the up-right before Sujeewa gratefully pounced onto the ball.

Negombo’s next opportunity came when Priyankara struck a good free-kick into the box, but Ayub rushed off his line and punched the ball away before the forwards could capitalize.

The Slave Island boys finally equalized in the 77th minute after Sajeewa pulled off yet another stunning save against Rizkhan’s effort. His defence failed to come to his rescue however, allowing Naveen Jude to hammer in the rebound past the fallen goalkeeper.

After the equalizer Java Lane seemed rejuvenated as they kept on the attack while Negombo Youth seemed to drop back attempting to hold on to a draw. A questionable decision was then made by the Negombo Youth management to bring off Bright Eshun, who had been having a brilliant game as he played a very N’golo Kante like role, running non-stop as he connected the defence and attack flawlessly.

It was all Java Lane from that point as Sujeewa was called into action yet again as he pulled off stunning saves to keep Negombo Youth on level terms.

Towards the end of regulation time Java Lane broke on the counter attack and seemed destined to score, with Naveen Jude bearing down on the opposition box with no defender near him. Yet again however Sujeewa was up for the task and rushed off his line to the edge of the box and pulled off a brilliant save to deny Jude.

Sujeewa’s hard work was yet again let down by his poor defence when early into added time Sujeewa pulled off another stunning save, but yet again his defense failed to clear their lines. Naveen Jude was there yet again to smash in the rebound and win the match for the Slave Island boys.

Video – “Players from Colombo FC & Renown have not turned...