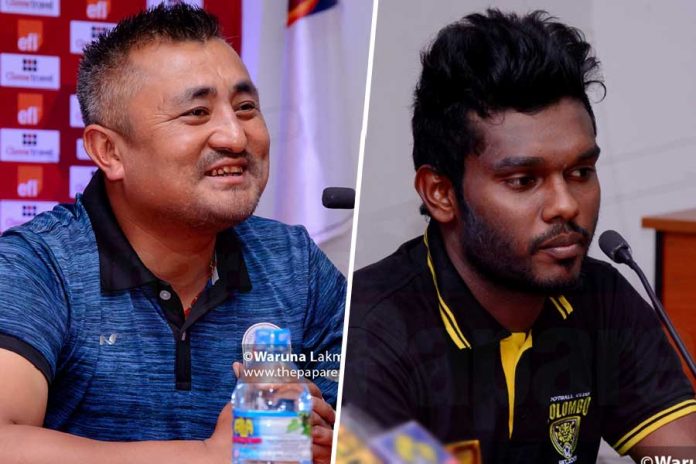 Both Colombo FC and Transport United are in the second attempt to qualify beyond the Preliminary Qualifying round and will go head to head on the 20th and 27th February.

Speaking to the media both coaches were optimistic about their chances of progressing to the next round.

“First time we are playing with Colombo FC. We couldn’t arrive earlier as we were still playing our domestic tournament matches. Weather in Colombo is pretty hot; however, we have to adapt to play in cold weather or hot weather as that is the nature of football.”

“We have 2 Nigerians and 2 Indians in the squad, our main striker Bakare Victor could not travel due some issues however we will manage without him.”

Tshering Samdup 1st team player speaking mentioned; “We are confident that we can beat Colombo FC with the team we have.”

Transport United has five Bhutan National Team players currently and 3 of the players have played in Sri Lanka in 2015 in the World Cup Qualifying match. Tshering Dorji, Hari Gurung and Kinley Wanchuk have all played previously in Sri Lanka when Bhutan beat Sri Lanka 1-0. Tshering Dorji did score the winning goal.

“We have prepared well. Training went well, and we hope to play well and win. We are playing in our own ground conditions and we have our supporters, the climate all in our favor so we are optimistic of winning.”

“There no changes and we have gone with the same squad and added 3 players due to injuries in the Dialog Champions League.”

Newly appointed Captain of Colombo FC for the AFC Cup Charitha Rathnayake, “Advantage is with us and we have played well and trained well as a team”

Saif Yusoof Manager; “We have to be as comfortable as we can. We cannot take it easy as Transport United are a good team. We will do our best with the squad available and we will put out a team fit for the game. We have put a huge effort to get everything in line to prepare for the AFC Cup.”

“Mohamed Imran will be starting in the goal as Kaveesh Fernando still not 100% the other team will be decided tomorrow.”