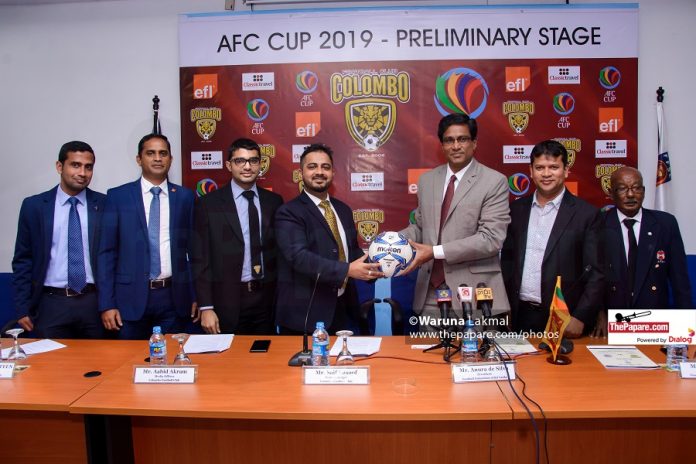 Colombo FC will be taking on Transport United from Bhutan in the 1st qualifying round match of the AFC Cup 2019.

Colombo FC will be taking on Transport United from Bhutan in the 1st qualifying..

Speaking to the media present Saif Yusoof elaborated the significance of the AFC Cup and the challenges faced to prepare for the two matches.

“It’s a dream to play in the AFC Cup for any club in Asia. The club had to meet several standards and requirements in order to compete. As a club we are excited to play against a club from Bhutan or India, we have added a couple of loan players to strengthen the lineup.”

While Colombo FC were embroiled in an intense last few weeks in the Dialog Champions League 2018, their opponents have had much better preparation.

“Transport United have already played friendly games to prepare in India and is a team we cannot under estimate. I am requesting all clubs and fans in Sri Lanka to come and support Colombo FC as this is International Football for Sri Lanka.”

“I also request the media to give full coverage and support to promote the match. We too will be doing a marketing campaign.”

Expressing his views, the President of the FFSL Anura De Silva;

“It’s a proud moment for FFSL as we know how Colombo FC progressed from Division 3 and has elevated to the highest level in the local arena. I am confident that Saif and his team will have a wonderful match and will be victorious on the 20th February and also whatever the condition in Bhutan you can still perform and bring glory to Sri Lanka.”

“We are there to support all the clubs and the clubs also have responsibility to take up and carry on. We don’t know who will qualify for next year based on the requirements given by the AFC and abiding by their regulations.”

The squad is currently undergoing a residential training camp and is better prepared than the last time when they played against Mohun Bagan in India.