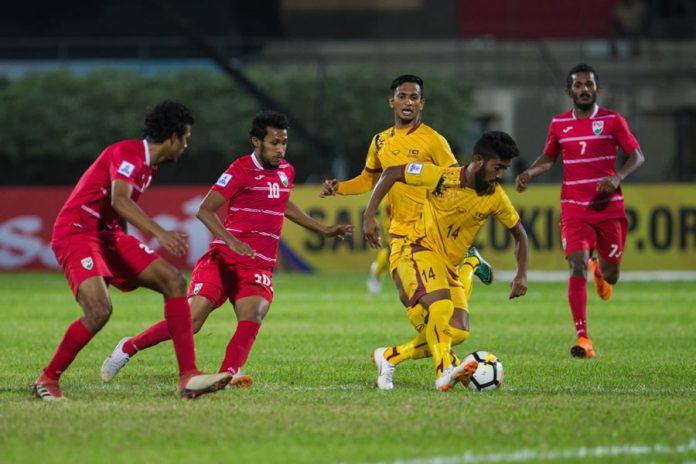 Sri Lanka missed out on a semi-final place in the SAFF Suzuki Cup 2018 after Maldives won the coin toss.

Sri Lanka lost their opening group B game 2-0 against India and drew 0-0 against Maldives. India needed to win by at least three goals against Maldives, for Sri Lanka to qualify for the semi-final. However, India could only secure a 2-0 win with Nikhil Poojary and Manvir Singh scoring in the 36th and 44th minutes.

Maldives 🇲🇻 and Sri Lanka 🇱🇰 are now level on points, goal difference, goals against and head-to-head. Who’ll go into the semi-final will be decided with a coin toss. Stay tuned!

The tournament rules stipulate that in an event where teams are equal on points they would consider firstly the goal difference, then goal against and lastly head-to-head. If all that cannot differentiate the two teams, then a coin toss would take place.

The 2-0 result between India and Maldives in Sri Lanka and Maldives, level on points, goal difference, goals against and head-to-head. Hence, the last semi-final place was decided by a coin toss which unfortunately Sri Lanka lost.

Maldives 🇲🇻 win the toss and will go through to the semi-final of the #SAFFSuzukiCup.