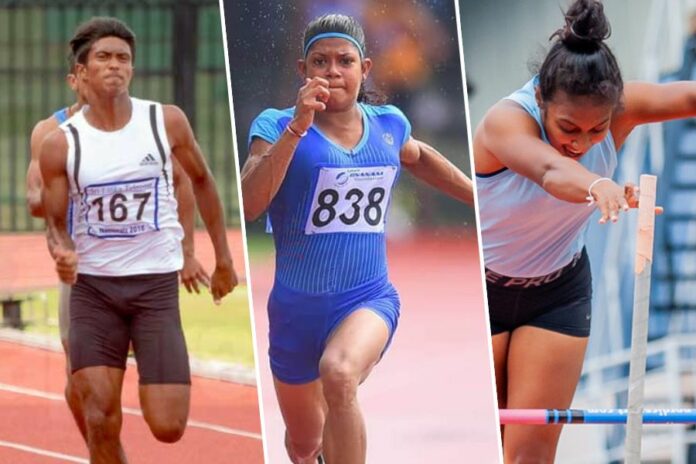 The second and final day of the Asian Games selection trials concluded this evening with yet another National Record in the Pole Vault, a junior record as well as three young stars qualifying to compete in the World Juniors.

Sachini Perera, the current Pole Vault National champ renewed her own record by a height of 3.70m. This was the only Senior record to come out of this trial. One junior record was renewed by Ameshi Hettiarachchi in the Women’s 400m with a time of 1:00.49min.

A massive upset in the Women’s 800m final as leading woman Dilshi Kumarasinghe was knocked out of her top spot by a sliver; young Tharushi Karunaratne inched over the finish line with a time of 2:06.99min while Kumarasinghe finished in 2:07.00 minutes. The South Asian champion opted out from the finals of the 400m event yesterday (10) citing the poor quality of the track in Diyagama.

Kaushalya Madushani won the Women’s 400m Hurdles event while Lakshika Sugandi won the 100m Hurdles in 1:00.15min and 13.71sec. Then came the 200m sprint finals with many top names missing from the start list.

In the Men’s Hurdles events, K Viduranga of Sri Lanka Army won the 400m Men’s title with a time of 52.26sec. Dhanushka Ariyaratne grabbed the Men’s 100m Hurdles in 14.79sec

Medhani Jayamanne and Mohamed Safan took hom the 200m winner titles. Jayamanne edged out Jayeshi Uththara for the win of 24.26sec. Uththara set a new Junior National Record, 55.19sec, in the Women’s 400m event. Mohamed Safan beat out P Lakshan who came in second for the title, with a time of 21.19sec.

The 100th National Athletics Championship will take place next from the 8th – 10th of April and will serve as the third and final selection trial for the 19th Asian Games which will take place in Hangzhou China in September.