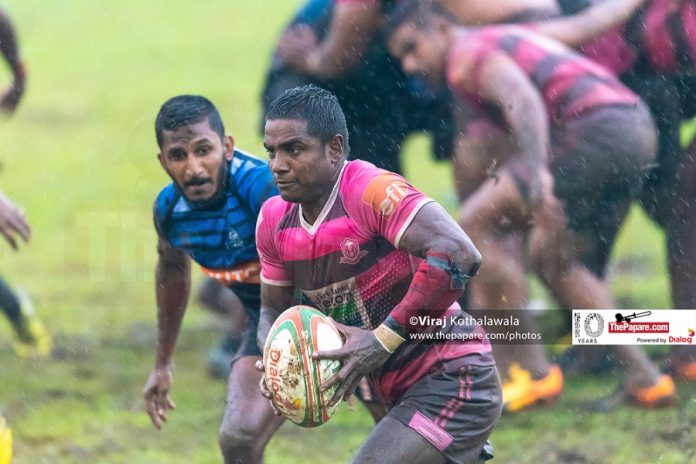 Havelock Sports Club managed to secure a deserved victory in their opening game of the Dialog Rugby League 2019/20 against Navy Sports Club at Welisara earlier this evening. The scores read 21 points to 3 at half time, but as the game neared its end the visiting team went on to win 35 – 03.

Isuru Kongahawaththa kick-started the 2019/20 Dialog Rugby League under dark and gloomy conditions at the Navy home grounds in Welisara. The Sailors were quickly on the scoreboard in the first half thanks to Kongahawaththa’s penalty. (Navy 03 – 00 Havies)

Havelocks responded quickly as their forwards went in to their trade mark rolling maul and Hooker Azmir Fajudeen found himself at the tail of the maul to crash over for the first try of the evening. Prince Chamara curled the conversion over from the touchline to make it a converted try. (Navy 03 – 07 Havies)

Havies changed the momentum towards them when Randy Silva’s blind pass ended up in the arms of skipper Mithun Hapugoda, allowing the Scrum half to speed past Navy defenders for his first try with Prince Chamara converting to increase the Havies lead.  (Navy 03 – 14 Havies)

On the brink of half time, the park club extended their lead when Randy Silva powered over after a patient build-up by the forwards with Prince Chamara yet again converting.

Things went from bad to worse for the Sailors in the 2nd half as Havies Fullback Prince Chamara spotted space and threw a long pass to Rukmal Fernando. Fernando took the advantage of an overlap and thundered down the right wing. Chamara made no mistake from the touch line to make it a perfect 7. (Navy 03 – 28 Havies)

Rain made the game slower under soggy conditions as both teams struggled but Havelocks were relentless in tightening their hold on the game, giving their opposition no opportunity to get out of jail as they secured the game with a fifth try when Dinushan Ariyapala cantered across the whitewash in the dying embers of the game.