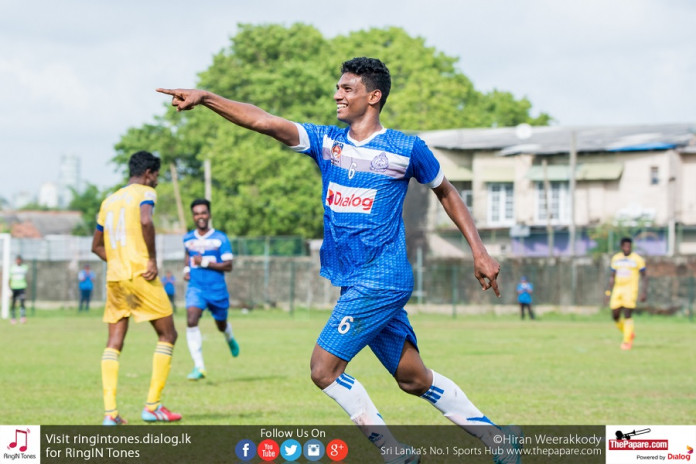 Navy SC was able to hold onto the lead as they managed a 2-1 victory over Super Sun SC in the DCL 17 fixture held at Kew Points Road.

Both teams showed early signs of intent, starting off bright but the early proceedings were full of overcooked passes and the sluggish ground conditions didn’t help the players much.

The first major chance came to Navy when Mohamed Shaheel unleashed a sharp low cross to Nirmal Wijethunga but the bustling forward failed to have enough contact with the ball and he missed he sitter.

Both teams displayed end to end football attacking relentlessly.  The first half was marred with missed chances though leaving both teams failing to assert domination.

Chaminda Athuraliya was at fault twice in front of the goal as he missed two easy chances both off Afis Olayemi deliveries.

In the first attempt, despite having sufficient time to take aim he dragged the shot wide. The next time Olayemi made it easier as he rounded off the goalkeeper reeling on the floor before feeding him the ball but Athuraliya hit the ball straight at the only defender and the ball deflected away.

On the other end Navy started to find some space behind the high pressing Super Sun defence. Mohamed Shaheel was denied a goal by a one on one save by the Super Sun goalkeeper Lawrence Prince who came down right on time to cover his near post.

Navy went ahead this time in the 37th minute. Krishantha Perera’s cross looked as if it will end up in the goalkeeper’s hands but Shaheel was able get some head on the way and the ball tickled inside the goal.

Navy got off to a dream start after the break. Krishantha Perera instrumented a nice team goal with a through ball to Dhanushka Madushanka who cut in expertly for Wijethunga who made amends for his earlier mistake by slotting the ball into the net.

Super Sun replied immediately in the 55th minute to bring the match to life. Afis Olayemi’s floated free kick effort was headed into the danger area by Mohamed Ramees. Bonsu Kwabena was at the right place as he directed the ball into the net using his body.

Super Sun as expected showed more desire as they brought the numbers forward trying to find the equaliser but it opened the doors for Navy to counter as they created a few opportunities. Madushanka forced a diving save from Prince in one such opportunity.

With time against them, Super Sun tried everything they could to salvage a point from the game but the Navy defence was compact enough to fend off the threats somehow with some last ditched defending.

Afis Olayemi created some opportunities in the dying minutes but Super Sun couldn’t find the elusive goal as Navy played out the minutes and registered their first victory.

“We tried 4-2-3-1 formation today. Even though we didn’t have the adequate facilities, we trained on keeping the possession and we focussed on fulfilling the roles. But we missed the chances in front of goal. It was the fault of the player. The new players have brought some qualities. Now we are trying to bridge old bunch with the new outfit to produce good results. Some players need to step up. Left side was a concern today in particular and we will look into it.”

“We came into the game after a defeat to Solid. We needed to turn the tables soon. It is nice to register the victory. Our main player Nagoor Meera was out injured. We gave the chance to two U19 players. They did well. We made lesser mistakes and won. There are a lot of new players. We are trying to give them exposure along with the experience of the veterans of the teams. We have to improve a lot and we will look into it.”