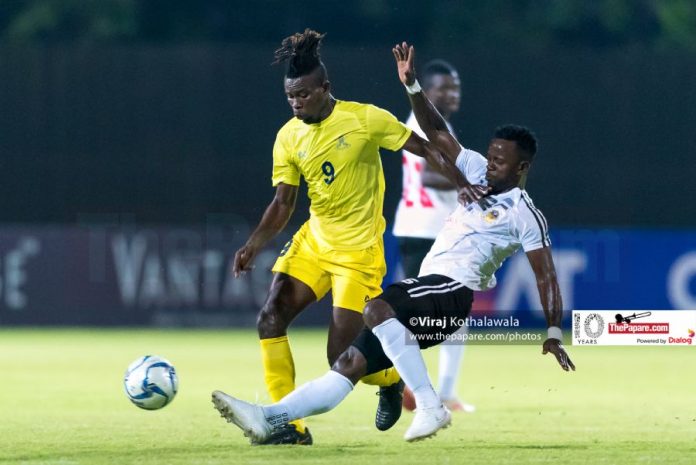 Defenders FC salvaged a 3-3 goal draw against Paro FC after an enthralling game of football in the 1st leg of the qualifying round of the 2020 AFC Cup played at the Race Course International Stadium, Colombo.

Both teams started the game with their attacking shoes on, but it was the Defenders that found their dream start with Sajith Kumara calmly slotting in a delicate pass by captain Sunil Roshan into the back of the net.

Defenders conceded too many fouls in their own half and eventually paid the price as a quickly taken free-kick was crossed by Chencho, which found an unmarked Dieudonne Fabassou who easily headed it home.

Paro took the lead in the 24th minute courtesy of sloppy defending from the Defenders. Fabassou chested a pass from near the halfway line into the path of Chencho Gyeltshen who took the ball into the box before placing it into the bottom-left far away from the diving hands of Mohamed Luthfi.

Defenders’ quest for an equalizer did the trick a few minutes later through a horror mistake from the Paro FC goalkeeper Gyeltshen Zangpo. Zangpo came out of his line to grab a long ball into the box by Francis Agbeti, but was confused by the run of Evans Asante which forced him to miss the ball and Evans who then got on the end of it kept his composure to drive the ball back into the net from an angle.

Paro FC found their third of the night just before the end of the second half when Fabassou buried home a cross from Chencho Gyeltshen who pulled off a brilliant piece of skill to get away from the Defenders.

The game lacked excitement with both the teams losing their attacking intent and failing to devise any goal-scoring opportunities early on in the second half.

But Defenders bounced back in the 63rd minute as Sajith completed his brace to put them back on level terms once again. Asikur Rahuman’s free-kick found Evans at the far post whose missed volley found the feet of Sajith who had no difficulty in putting the ball back in the net.

Players of both the teams had their fair share of chances to go in front but failed to make them count due to their poor finishing in the final third as an entertaining game of football came to a closure with each team sharing a piece.