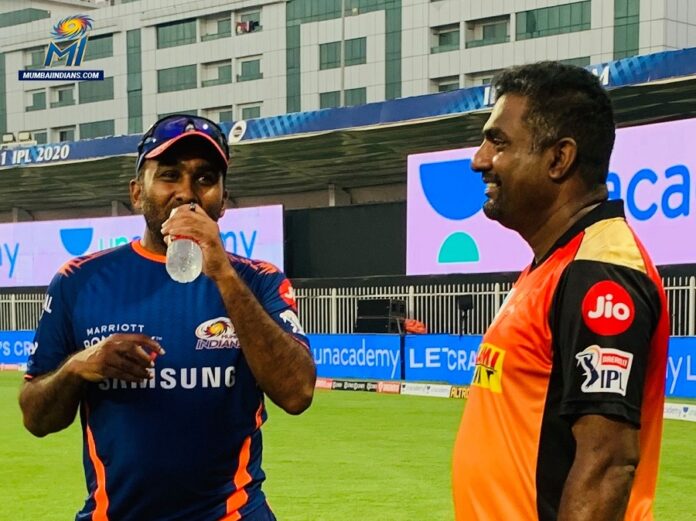 Muttiah Muralitharan, who is currently involved with the International Cricket Council (ICC) as an Ambassador in the ongoing ICC Men’s T20 World Cup 2021 reckons that his former teammate Mahela Jayawardene’s presence as a consultant coach is a huge bonus for Sri Lanka in the competition.

Whilst Jayawardene is performing his role as a consultant coach, Murali’s duties involve promoting the game in the UAE. Despite Jayawardene’s time with the team ending today (22nd October) after the fixture against the Netherland’s, Murali believes that his experience in the dressing room would have been massively important for the young players during the past two weeks.

“They [Sri Lanka] are playing really well because they have been involved in a lot of games. In addition to that, the presence of MJ [Mahela Jayawardene] is a huge bonus. These boys for the last six or seven years have had little guidance. I know Mahela’s guidance has been for a very short period. But, in T20 cricket, he is very experienced. He is winning competitions everywhere in the world. He knows how this format needs to be played and he is sharing his experience in the dressing room, which is great. Players can learn. That will allow them to improve.” Murali told the Sri Lankan contingent of Journalists covering the ICC Men’s T20 World Cup in the UAE.

Murali, who is also a part of the Cricket Advisory Committee at Sri Lanka Cricket, confirmed that Jayawardene’s stay will not be extended, despite widespread calls for the former Sri Lankan captain and current Mumbai Indians coach to stay on.

“When we had a word with him on this, we realized that he had been away from home in bio bubbles for four months. He needs some rest. He agreed to start off the tournament and put the puzzles in place. You have the Coaches and the Chairman of Selectors [Pramodya Wickramasinghe] is also there, they can take over.” Murali said.

49-year old Muralitharan is the most successful bowler ever in world cricket, having taken 1347 wickets in all three formats. He had a word of advice for young ‘Mystery’ spinner Maheesh Theekshana, who is currently the highest wicket-taker for Sri Lanka in the competition with 6 wickets in 2 games.

“Maheesh is bowling well and he is taking wickets. It will go up and down. He will learn the hard way. What happened to Ajantha Mendis, we all know. The first two years it will be easy. Then through experience he has to make sure to improve himself.”

He also believes that the spinners will play a pivotal role going forward in the competition. The pitches in the UAE are already showing signs of wear and tear. In the current ICC T20 Bowling Rankings, out of the top 10 bowlers, eight are spinners, which does not surprise Murali.

“Slower you bowl, the harder it is to hit. Batsmen will like when the ball comes onto them. But it is not the same with spinners. So, spinners will have a major impact in T20 cricket. In the same way, fast bowlers have to learn to bowl slow balls, knuckle balls. The IPL started in 2008 and now it is almost 14 years. T20 cricket started in 2003 and I played in Lancashire. In this 20-year period the game has changed dramatically. Everyone thought the spin bowlers will be ineffective and concede fours and sixes. But, the spinners are dominating. It is the way they learn and practice and come up with different ideas. “

With the Super 12 stage all set to commence tomorrow (23rd October), Muralitharan believes that any team can win on any given day. Therefore, he reckons Sri Lanka may fancy their chances too. However, with Sri Lanka set to play in Group 1 alongside West Indies, Australia, England, South Africa and Bangladesh, the islanders will need a massive, superlative effort to reach the knockout stage.

“In T20 cricket any team can win. You don’t know which team will win. Like when we won in 1996, even we never thought we will win. I played in that tournament and we thought we will lose most games. We were not sure that we will reach the finals. But we did not lose a game. I am not saying that we have a talented team like that here. You may think it is not possible. But impossible things have been achieved in cricket. “