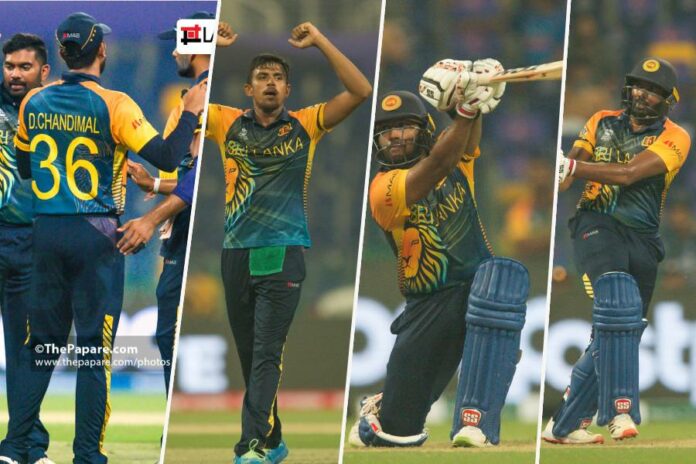 Sri Lanka got their ICC Men’s T20 World Cup 2021 campaign off to a comprehensive 7-wicket win over Namibia in their Round 1 clash, worked out at Sheikh Zayed Stadium in Abu Dhabi on Monday.

The bowlers produced a superlative, combined effort to bundle Namibia to 96, having opted to bowl first. Chasing a mere target of 97, Sri Lanka had a nervous start, losing their first 3 wickets for just 26. However, Avishka Fernando and Bhanuka Rajapaksa weathered the early pressure to add an unbroken 74-run stand for the 4th wicket to take Sri Lanka over the line with more than 6 overs to spare.

Earlier, playing on the same pitch used for the afternoon game between Ireland and Netherlands, young off-spinner Maheesh Theekshana struck in his first ball to dismiss opening batsman Stephan Baard as Sri Lanka turned towards spin in the 3rd over. Whilst, Dushmantha Chameera and Lahiru Kumara consistenly troubled the Namibian batters with extra pace, Theekshana got the better of Zane Green as the African nation were 30 for 2 at the end of the powerplay.

Despite Sri Lanka’s trump card Wanindu Hasaranga going for 15 runs in his first 2 overs, Namibia could not get a move on as they were 54 for 2 at the half-way point. Soon after, Namibia Skipper Gerhard Erasmus was dropped on 15 by Chandimal at cover-point, depriving a wicket for seamer Chamika Karunaratne.

Craig Williams and Skipper Erasmus added 39 runs for the 3rd wicket, but failed to up the scoring-rate against some disciplined bowling.

Kumara broke the partnership as Erasmus was caught at long-on for 20. Williams, Namibia’s best batter in recent times, tried to reverse-sweep Hasaraga and was adjudged plumb in front for 29, as Namibia slid further to 73 for 4 in the 14th over.

Namibia were 5 down when experienced ex-South African David Wiese was beaten for pace and swing by Karunaratne, ending any hopes for a revival.

The lower order had no clue how to raise the scoring rate as the Namibians were dismantled against some quality bowling. The two spinners Hasaranga and Theekshana shared 5 wickets for 49 runs from their 8 allotted overs, while the three seamers – Chameera, Kumara and Karunaratne – took 4 wickets. Whilst Chameera and Kumara bowled consistently above 140 kmph, Karunaratne too bowled in the high 130s, which proved to be the main difference between the two teams.

Sri Lanka’s top order faltered as experienced wicket-keeper batter Kusal Perera was caught at mid-off for 11 off Ruben Trumpelmann in the 2nd over. Pathum Nissanka, Perera’s opening partner, was trapped in front by left-arm spinner Bernard Scholtz for 5.

One-drop batter Dinesh Chandimal looked completely out of touch as he made only 5 runs off 12 balls, before becoming JJ Smit’s only scalp.

Rajapaksa and Fernando played most of their strokes in front of the wicket, as the inexperienced Namibian bowling attack failed to stop the left-right combo

Fernando, in his new batting position at number four, adapted well to the conditions, and at times played the second fiddle to a more expansive Rajapaksa. Fernando made 30 runs off 28 balls with 2 sixes, while Rajapaksa top-scored with an excellent 42 off 27 deliveries with 4 fours and 2 sixes.

Sri Lanka will play Ireland on 20th October at the same venue. With Ireland beating Netherlands earlier in the day, Wednesday’s clash could well be the clash to decide the toppers of Group A.