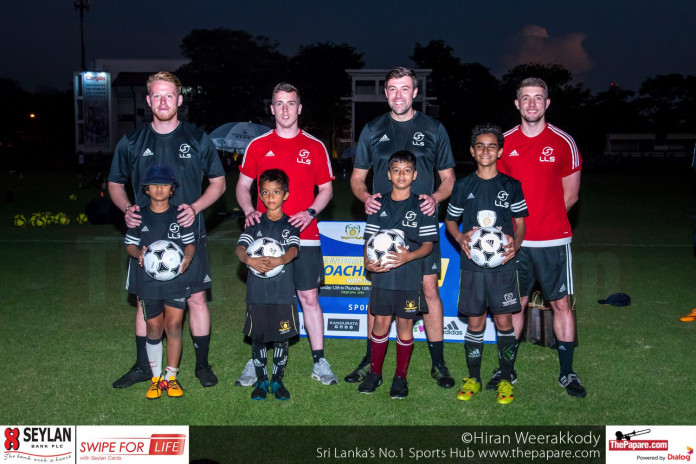 “The key aim was getting children active and trying to educate them about healthy life style and healthy living. Since then we’ve come from working in Liverpool with 29 children participating and 2016 we’ve coached 29,000 and had a positive impact on their lives,” Marc Garnett, Commercial Director of LLS added.

“LLS were invited by TAFA in June 2016 and we were given the opportunity to observe their work and based on our observations we decided it would be a good opportunity for LLS and also a good idea to upscale the coaching of TAFA. So we came down with English FA qualified coaches to pass their knowledge to the coaches and from them to the children,” he expressed on how the partnership was built between TAFA.

Garnett is one of the four coaches who visited Sri Lanka for the Coaching Camp which was held mid-December. He is a UEFA qualified coach who has experience working with Liverpool & Manchester City Premier League clubs as well as in countries such as USA, Canada, Finland and Qatar.

The other three coaches who are UEFA qualified include Steven Beddard from Manchester UK who worked with the U14’s and is part of the Rochdale Academy, Conall McNally form Belfast, Northern Ireland and Alex Barlow who as a youngster played for Preston North End.

“The camp was an exciting one. The children here love football. We wanted to take all those and share our knowledge so that they could develop,” an enthusiastic Garnett added.

“Day one was attacking like Messi. Day 2 we did some passing like Iniesta. Day 3 we did shooting like Suarez and day 4 was all about fun and games so that players could put in what they learnt in game related situations,” he added on how the camp progressed.

“The most important thing for us was that players had fun and every participant improved. One thing we were really impressed was that there are some really talented players in each of the age groups. We did some talent identification and there are around 3-5 players who we intend to take to UK and introduce to Premier League clubs,” he went onto say.

This would definitely be a great experience and a learning curve for the youngsters who are dreaming to be footballing stars.

“We see our partnership as a long development project and our aim is to continue delivering these camps and also develop the coaches. So every morning we did education for the coaches and we do camps in the afternoons. It is a three way process; we teach the coaches, and then teach the children.

We want to change the way coaches work in SL. We want to improve the standard for that we need quality coaches,” Garnett finally added with a glint of excitement in his eyes.