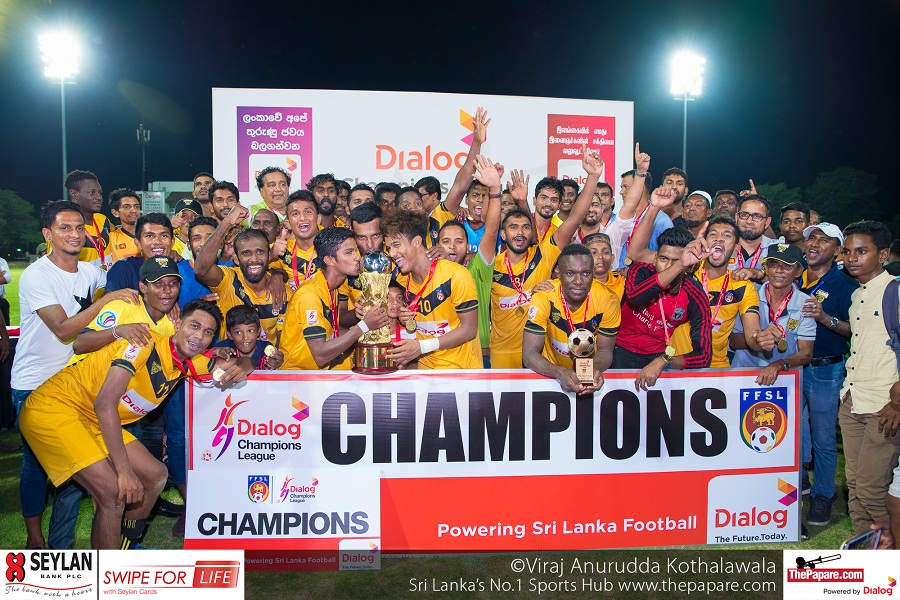 Colombo FC retained their Dialog Champions League Championship with a hard fought, come from behind 3-1 win over Renown SC at the Race Course International Stadium.


Leading upto the finale Colombo FC had their unbeaten streak snapped by Blue Star SC while Renown came from a goal down to win against Navy SC, to put them in pole position for the title run.

The game became a virtual final after Blue Star failed to pick up a win over Army in the early kick-off as Renown needed just a draw and Colombo FC needed the win to walk home with the championship trophy.

As in the previous game on the day, both teams struggled to adapt to the sand filled pitch with many passes going astray and the midfield play of both teams severely hampered as a result.

However Colombo FC did start slightly better as Renown were saved by the post early on as Tboy Francis after deflecting a shot from Zarwan Johar towards his own goal, made a spectacular goal line clearance on to the post and out to keep the score at 0-0.

Despite enjoying the lion share of possession, Colombo FC soon found themselves a goal down as their defence completely fell asleep at a crucial moment.

Renown skipper Mohamed Rifnaz fired a free kick from an advanced position into the Colombo FC wall, and then his rebound was nothing but a hopeful hoick into the penalty area. However, Job Michael had escaped the attention of the Colombo defence and found himself one on one with Mohamed Imran and prodded past him to score an opportunistic goal and give Renown the lead against the run of play.

The lead did not last long though as David Osagie soon had Colombo FC level on the verge of half time as he was threaded through by Zarwan Johar to slot past Mohamed Uzman and shift the momentum back towards Colombo FC.

Fazal then had a fine effort from the edge of the box tipped over the post by Imran and Zarwan rattled the crossbar from a free kick as the half ended even stevens.

The second half started similar to the first, with the teams getting bogged down in the middle of the park.

Colombo FC went into the driving seat within 10 minutes of the restart as Momas Yapo held the ball up brilliantly for Dhanushka Madhusanka who slotted home from the edge of the box through a sea of bodies.

Afis Olayemi then forced Mohamed Uzman into a fine save after drilling a shot goalwards from the edge of the box. The Renown keeper, who had picked up a knock just a few minutes earlier, adjusted well midair to produce a great save to keep Renown in the game.

The game grew increasingly scrappy as time progressed with a string of injuries disturbing the flow of the game. Renown did create chances of their own as Mohamed Rizni forced Vikum Kumarasiri into a clearance off his goal line as Renown started to grow increasingly desperate.

Colombo FC made their job of holding on to the lead easier by continually pressing forward whenever given the opportunity.

Ahamed Shazny finally turned home a game sealing goal for Colombo FC on the counter in injury time, just after Imran made a superb save to deny Rifnaz at the other end as Colombo FC were crowned champions for the second year running.