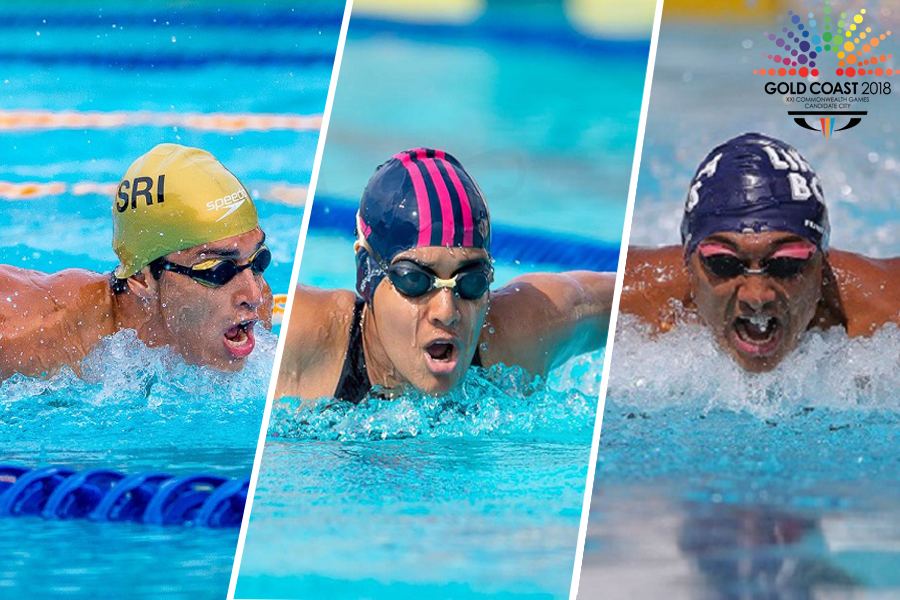 Six of the top swimmers in Sri Lanka have been selected to compete in this year’s Commonwealth Games, to be held in Gold Coast, Australia from the 4th to the 15th of April. Two women and four men, with the best timings in their respective events have been picked by the Sri Lanka Aquatic Sports Union to represent the country at this prestigious event.

Filling the two spots in the girls’ team and making their debut entry to the Commonwelath Games are Vinoli Kaluarachchi of Sirimavo Bandaranaike Vidyalaya and Dilrukshi Perera of Hillwood College Kandy. Both girls, having had a brilliant run in 2017, have clocked in impressive stops, to earn their place in the National squad this year. They will bring in prior international experience to the table as both Vinoli and Dilrukshi have had the honour of representing Sri Lankan in World Junior events in 2016 and 2017.

The more dominant lot, the fastest men of Sri Lanka Swimming have been capped out at four with Cherantha De Silva, Matthew Abeysinghe, Kyle Abeysinghe and Akalanka Peiris making the cut. Sri Lanka’s own, Abeysinghe brothers will join hands to make a mark for the first time in the competition. Kyle Abeysinghe, is one of the youngest swimming sensations, winning two silver medals at the 2017 Commonwealth Youth Games in the 50m and 100m freestyle events. Along with many notable international appearances, this will be Matthew Abeysinghe’s debut entry in the Commonwealth Games and will look at increasing his impressive line of feats.

“I want to BEAT my role models” – Cherantha De Silva

Here’s a story of a man who strives for nothing but greatness. A boy who takes pride in being confident

Cherantha De Silva, who is currently a full-time swimmer in Thailand will bring in international record-breaking form into the team’s composure. He was able to break the National record held by Matthew in the 100m freestyle as well as obtain the new National Short Course record of Singapore, earlier this year. Cherantha is the only returning member to the Commonwealth squad this year and will be a valuable addition to the team.

Akalanka Peiris, a young national coloursman, is coming hot off the 9th Asian Age Group Championships with 2 records under his belt. Akalanka was the highest ranked swimmer at the 43rd National Age Group Swimming Championship 2017 and is considered to be a promising up and coming swimmer in the country.

The team will look at competing in their individual strengths but will fight for one goal in the end; to bring gold to mother Lanka. Stay tuned to ThePapare.com for more news and updates on their journey.