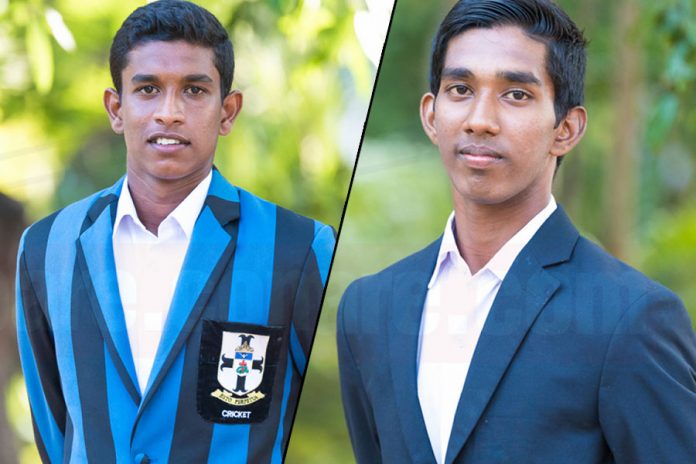 Six matches of the Singer Schools ‘Under 19 Division 1’ Cricket Tournament 2018/19 were conducted today around the island.

Five matches of the Singer Schools ‘Under 19 Division 1’ Cricket…

The traditional fixture between S. Thomas’ College and Wesley College commenced today at Mount Lavinia. The Thomian skipper Sithara Hapuhinna won the toss and chose to bat first in their own backyard. The two openers Sithara Hapuhinna and Shalin de Mel provided a solid start to the innings but the former was dismissed for 21 runs when the score was at 32.

Thereafter, the hosts continued to lose wickets at regular intervals without any significant partnership as they declared the innings at 152 runs for 9 wickets. Umayanga Suwaris showed some resistance with the bat scoring 45 runs off 76 balls. Left-arm spinner Thenuka Perera bowled 14.4 overs and picked up 5 wickets for 31 runs for the visitors.

In reply, the visiting openers Thisuraka Akmeemana and Buddima Wijesundara gave them a similar start to the innings putting on a 32 run partnership but the rest of the batting failed against some quality spin bowling shown by left-arm spinner Dellon Peiris. The visitors were bundled out for just 91 runs with former skipper Peiris picking up 7 wickets for 26 runs in his 13 over spell.

With this 7-wicket haul, Dellon Peiris now has picked up 55 wickets in this season including three 5-wicket hauls. With a 61-run lead, Sithara Hapuhinna and Deon Fernando opened the innings for the hosts and managed to remain unbeaten at the crease scoring 46 runs in 11 overs at close of play.

Royal College completely dominated the first day’s play of their traditional fixture against Ananda College which commenced today at Ananda College grounds in Colombo. After winning the toss, the visitors opted to bat first and posted 373 runs for 2 wickets before declaring the innings.

Left-handed stroke maker Kamil Mishara who scored two centuries against the visiting Australia U19 team recently stroked a magnificent double century for the visitors. His knock of 250 runs came off 274 balls including 32 fours and 5 sixes. Incidentally, Mishara has notched up the highest individual score for Royal College in their cricketing history.

Ananda College will be devastated as this is the second 250+ individual score they have conceded this season.

In reply, the hosts were struggling at 48 runs for 5 wickets at the close of play on day one.

Six matches of the Singer Schools ‘Under 19 Division 1’ Cricket…

The traditional fixture between Mahinda College and Dharmaraja College commenced today at Dharmaraja College grounds in Kandy. After being put into bat first, the hosts posted 325 runs with Kasun Gunawardhane (82) and Isuru Dayananda (60) making significant contributions with the bat.

In reply, the visitors also got off to a great start to the innings as they finished day one on 70 runs for no wicket in 10 overs. Sri Lanka U19 cap, Navod Paranavithana remained unbeaten on 38 runs for the lads from Galle.

Three matches of the Singer Schools ‘Under 19 Division I’ Cricket…

The traditional fixture between Trinity College and St. Joseph’s College commenced today at St. Joseph’s College grounds. After winning the toss, the visitors opted to bat first and posted 232 runs with Pubuda Bandara top-scoring with a knock of 78 runs. The hosts replied strongly with the bat scoring 115 runs for 1 wicket at stumps on day one. 14-year old Shevon Daniel (70) and vice-captain Johanne De Zilva (45) remained unbeaten at the middle.

Five matches of the Singer Schools ‘Under 19 Division I’ Cricket…

Maliyadeva College defeated Isipathana College in a comprehensive manner registering an innings victory today at Maliyadeva College grounds in Kurunegala. Supun Sumanarathne (175) and Kavin Bandara (122) were the standout performers with the bat for the hosts while Maduranga Naveen shone with the ball picking up a match bag of 8 wickets for 142 runs.

Nalanda College recorded an innings victory over Presidents College in their Group B fixture which concluded today at Nalanda College grounds in Colombo. Sri Lanka U19 cap, Raveen de Silva shone with both bat and ball for the hosts stroking a half century and picking up a 7-wicket haul with his leg-spin.