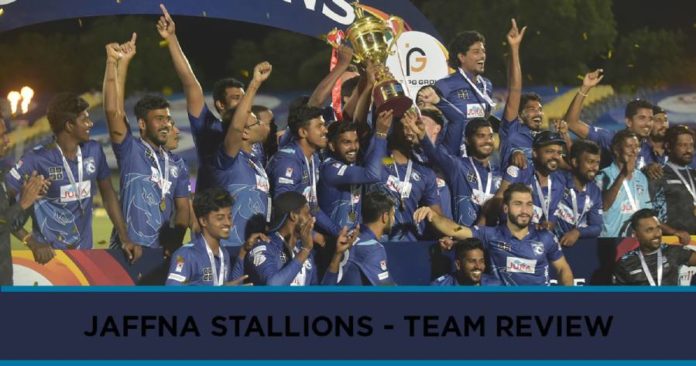 A blistering start to the inaugural Lanka Premier League and a shaky middle period ultimately culminated in one of the Jaffna Stallions’ most complete performances as they completed a comfortable 53-run win to clinch the title in the grand finale to Sri Lanka’s first franchise-based cricket tournament in 8 years.

The signs were there even before the tournament, as the news surrounding the Stallions suggested that this was a franchise that was well-prepared and focused on the ultimate prize. The only team to conduct a pre-tournament camp, in Thilina Kandambi the Stallions had a capable, experienced coach and it paid off in the best possible way.

The Stallions campaign started off with an what was a comfortable win, against eventual finalists Galle Gladiators, but it was their next game that really showcased what a dangerous team they were. Having lost half their side for just 64 runs in nearly 9 overs, the Stallions still managed to set their opponents Dambulla Viiking a target of 219, thanks to skipper Thisara Perera, who blasted his way to 97 off 44 deliveries. Perhaps more ominously, he did the same in the very next game, this time rescuing the Stallions from 49/4 to finish with 185 with 68 off 28.

Having come back from dire situations to keep their win streak alive, they then secured another comfortable win against the Gladiators, which more of less secured their place in the semi-finals. With this in mind, the management took the bold decision to tinker around with their line-ups for the remainder of the league phase. The experiments nearly failed with the Stallions losing 3 of the next 4 matches (including one no-result), sending the team in blue into the semis with none of the momentum they had built up in the early stages of the tournament.

However, with their full-strength XI back on the park and the ‘Oxygen blue’ jersey ‘benched’, normalcy returned as they overcame a below par batting performance to secure a win in the 2nd semi-final, against the Dambulla Viiking. The batting was disappointing once again, but that much-touted bowling attack kept doing the job for the Stallions.

The final saw a near perfect performance from them once again, as though the top order stuttered, they ended with a competitive total of 188 and then did what they do best with the ball to take home the title. SO good were they in fact, that they didn’t really have to depend on the tournament’s top wicket-taker Wanindu Hasaranga in the final.

The highs and lows

The Stallions campaign saw a number of good performances and credit to the leadership as most of the players they tried made an impact in at least a couple of games.

Perhaps the most talked about inclusion was that of Vijayakanth Viyaskanth, who made history as the 1st player from Jaffna, a city rich in cricketing history, to play in the LPL. He was also the youngest player to play in this edition of the tournament and showed that he wasn’t just there for the optics, bowling some decent spells in the 3 games he played.

On the opposite side of the spectrum in terms of experience, Suranga Lakmal was another one who had a good tournament, getting the ball to move and picking up the early breakthroughs for the Stallions. Dhananjaya de Silva was another who flew under the radar but did his part perfectly for the team. Sometimes considered too conventional a batsman, de Silva showed that he was capable of adding value as a middle order batsman and took on a major role with the ball, often taking the new ball for the Stallions.

Of the overseas signings, Duanne Olivier was one that skipper Thisara Perera relied on to get the breakthroughs. Olivier bowled slower than what we have seen of him in the past and was expensive, but still managed to make crucial breakthroughs for the team.

If there was any disappointment in terms of performances, it would have to be about left-handers Minod Bhanuka and Charith Asalanka. Both showed glimpses of what they are capable of, but ultimately did not live up to potential.

Jaffna were perhaps one of the least affected by player withdrawals, as they lost Dawid Malan, Ravi Bopara and Asif Ali prior to the tournament. However, the overseas players they did have, including Johnson Charles, Tom Moores, Usman Shinwari, Shoaib Malik etc, did their jobs well enough that even the World No. 1 T20 batsman Dawid Malan was not really missed.

Unfortunately, we did not get to see any of the supplementary players in action but guys like Thevendiram Dinoshan and Nuwanidu Fernando are definitely investments for the future.

Stars of the show

Hasaranga was nothing short of a revelation during the tournament. He was the one man who could be relied on to both take wickets and keep runs in check with the ball and also played some invaluable innings lower down the order. Well clear of the others in the top wicket-takers column, he was also the only bowler (with at least 1 wicket) to maintain an economy rate below 6 runs an over – a testament to just how good he was.

Perera led from the front as skipper, announcing himself with a counter-attacking 97 against the Gladiators, arguable the innings of the tournament. And he showed that it was no flash in the pan with a half century in the next game as well and a couple of end of innings blitzes. He used himself sparingly with the ball, as he would with the number of bowling options he had, but still managed 5 wickets in the tournament.

Fernando was the man for the Stallions at the top of the order and built on his reputation as a sweet timer of the ball with some exquisite innings through the tournament. He finished as top run-scorer for the Stallions.

Malik was brought in to strengthen what looked like an inexperienced middle order and he did just that, being the steading influence as Jaffna suffered collapse after collapse. His Player of the Match performance in the final was the cherry on top to a stellar tournament.

Shinwari didn’t grab too many headlines but was a key figure in the Stallions’ campaign. The left-armer was called upon to do much of the containing work at both ends of the innings and bowled some tough overs for the team, when wickets were in dire need. He also produced some critical dismissals on the field, in a tournament which saw over 50 such opportunities going abegging.

The Stallions came into the tournament as many people’s favourites to win, they started off in fine fashion and through their management of players and planning, were able to overcome a mid-league slump to ultimately take home the title. They were proof of the value of planning – remember they were the only franchise to pick a local (Wanindu Hasaranga) as one of the team’s 2 marquee players – and preparation in achieving ones goals.