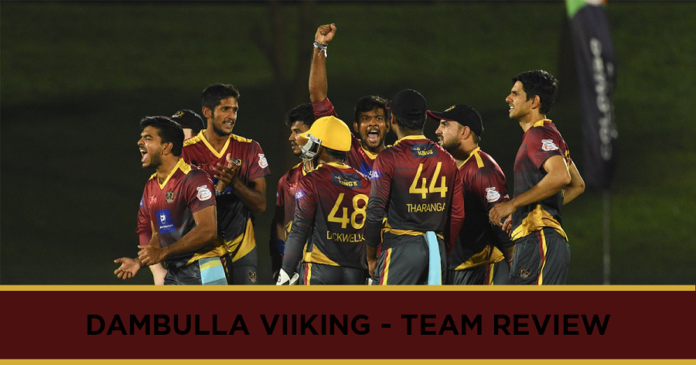 The Dambulla Viiking perhaps could be satisfied with their showing in the inaugural edition of the Lanka Premier League, after a 2nd place finish in the League phase before being knocked out by the eventual champions Jaffna Stallions in the semi-finals.

A decent squad on paper, the hardest thing for the team prior to the tournament seemed to be picking a suitable name, as they initially began as the Dambulla Hawks, with former national batting coach Jon Lewis in charge, were then briefly called the Dambulla Lions, before finally settling on Dambulla Viiking, with Lewis replaced by fellow Englishman Owais Shah.

The Viiking campaign was a good one, as they ended the league phase with just 2 losses in 8 games. Nicknamed ‘Sons of Thor’ they were appropriately assisted by the weather on two occasions, particularly in their tournament opener, when bad weather stopped play at exactly the right moment for them, when Kandy Tuskers were just 5 runs behind the Duckworth-Lewis par score.

A heavy loss to the Stallions followed but from then on, all aspects seemed to click for the Viiking, as their batsmen made runs and the bowlers were able to restrict opposition teams well. They went on a 5-match unbeaten streak (including one no-result vs Jaffna Stallions) to secure their spot in the semis. They did test the saying ‘catches win matches’ when they put down 5 catches against the Gladiators and still somehow managed to win.

Come the last game of the league phase, they faced the Colombo Kings, with only the order of the 1st and 2nd teams to be decided. A win would have meant a top of the table finish and a semi-final battle against the Galle Gladiators, who they had beaten twice in the league phase. Unfortunately, they couldn’t secure the win thanks to a blitz by Qais Ahamad and had to face the Stallions, who had dominated them in their two games, in the semis. Ironically, a win for the Viiking, may have been the better result for the Kings too, who had a strong record against the Stallions.

In the semi-final, Jaffna did look like they were on their way to a massive total, but a stellar bowling performance at the death by Kasun Rajitha and Lahiru Kumara saw them restricted to 165 – what looked like a below-par total. However, a brilliant bowling display and a couple of critical run-outs shook the Viiking and they ended up succumbing to a heavy defeat.

There were some promising signs for the National set-up from the Dambulaa Viiking squad, as a number of local players performed well throughout the tournament. Kasun Rajitha emerged as a decent option for the backend of the innings, while speedster Lahiru Kumara, though disappointing in the early stages of the tournament, also put together a good performance or two towards the latter stages.

Team Review: The Kings let down by one bad day with the bat

Of the overseas signings, Samit Patel brought in all his experience and was a consistent performer with both bat and ball, while Afghan Samiullah Shiwari too put in a match-winning performance against the Gladiators.

Veterans Paul Stirling and Upul Tharanga unfortunately could not do much during the tournament, though they would have been two that the Viiking leadership was counting on to deliver the goods. Stirling made just 3 runs in 3 games, while Tharanga, though he did get a half century in a win against the Gladiators, would have expected more from himself.

Prior to the tournament the Viiking lost the services of Lendl Simmons, David Miller, Carlos Brathwaite and Kamran Akmal, all who could have made a major impact on their chances of lifting the trophy. They were also unfortunate enough to lose Oshada Fernando in the first game of their campaign as the right-hander was ruled out of the tournament due to an ankle injury.

The Viiking did rotate their players, looking for the perfect combination but one player who may have had a bigger impact had he been given the opportunity was Pulina Tharanga, who managed just 2 games. The legspinner has a very good record in domestic T20 cricket and is also handy with the bat.

Ali was one of the key bowlers for the Viiking and one who skipper Dasun Shanaka turned to to deliver key overs in the innings. He was on target at the death and also managed to pick up some crucial wickets along the way.

Dickwella didn’t really do much with the bat in the first half of the season but came to his own later on, with a number of impactful innings. Another one to throw his name back into contention as one of Sri Lanka’s openers in limited overs cricket, he was also arguably the best wicketkeeper on show in the tournament – his stumping of Shoaib Malik in the semi-final against Jaffna Stallions was proof of how good he is behind the stumps.

Perera didn’t even start off as an automatic pick in the Viiking line-up but by the end of the tournament, had established himself as one of their main stays. His 67 off 49 against Kandy Tuskers was a match winning knock and proved to be the calm head the Viiking needed in their middle order.

Shanaka once again proved why he is such a highly rated all-rounder. Though he used himself sparingly with the ball, it was with the bat that he really shone, playing a number of match-winning knocks in the tournament. He led the charts as the top run-getter for the Viiking and was also impressive as captain, managing his resources well on the field.

The Viiking would be disappointed with their batting in the semi-final, however overall, cannot really fault the way things went for them, as they did show a lot of grit during the tournament.