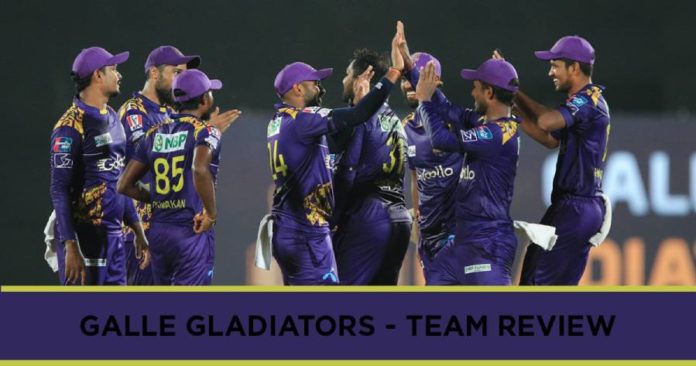 Galle Gladiators went from nearly being eliminated to stunning the in-form team of the tournament Colombo Kings in the semi-finals, before finally meeting their match and falling one step short of the championship.

The Gladiator campaign went nearly as well as any Pakistani has done in the past – appropriate because the franchise is owned by Pakistani Nadeem Omar of Omar Associates. In the first 5 games of the tournament, they looked like they had no idea what they were doing or why they were even there. But then, they won 3 of their next 4 games and suddenly they were serious contender to win the title. The Jaffna Stallions proved just too good on the day, unfortunately for the Gladiators, but given their start in the tournament, the franchise wouldn’t be too unhappy about where they ended up.

The first half of the tournament was all about one man for the Gladiators – Danushka Gunathilake. The left-hander dominated opposition attacks game after game, however, with little to no support from anyone else, the Gladiators continued to lose. The turn around came in their game against the Colombo Kings, who they managed to thrash by 8 wickets to secure their 1st win of the tournament. The last to get a win on board, things finally began to click for the Gladiators, though they did the bare minimum to qualify for the semis – pipping the Kandy Tuskers on net run-rate, after both teams finished with 2 wins in 8 games.

With no play-off system in play, come the semis, all 4 teams were on a level playing field and it did not matter that Galle got there with 2 wins and Colombo did so with 6 wins in the league phase. Galle were the better team on the day, with their impressive quicks strangling the Colombo batsmen early in the innings and spinners crippling them in the middle overs. They pulled a Pakistan-esque chase, where thye looked like they would dominate, then gave away a few wickets to make the chase hard for themselves and ultimately pulled things off in dramatic fashion, with a boundary off the penultimate delivery of the game.

There was to be no such drama in the final, where the Stallions had the better of them for much of the game and ultimately came out deserved winners.

The highs and lows

Shahid Afridi proved that age was just a number to him, starting the tournament in true ‘Boom Boom’ style with a 23-ball 58. Azam Khan too was an inspired selction behind the wickets and despite calls of nepotism in selection from fans and jibes about his physique, the 22-year-old son of coach Moin Khan that he coul keep his place on merit alone, with some blistering knocks with the bat -though he will be disappointed that he was unable to convert any of them into big scores.

On the local front, Nuwan Thushara, who had thus far been seen as merely a cheap copy of his idol Lasith Malinga, showed that although he wasn’t as accurate as Malinga, he could do the job for the team both at the death and with the new ball. Players like Thushara and Lakshan Sandakan were part of the revival of the Gladiators at the business end of the tournament. Sandakan, though he flew under the radar with much of the attention going to the fast bowlers, did his job well, picking up wickets in the middle overs.

Bhanuka Rajapakse was entrusted with the captaincy with the departure of Shahid Afridi and had a respectable time of it, though again, he would be disappointed that he was unable to contribute more to the team’s cause. He began coming to his own in the latter part of the tournament and played a brave 40 off 17 balls in the Final, despite looking in considerable pain due to a side strain.

Galle also featured a number of experienced national players, who they would have hoped would contribute more but it wasn’t to be, with Milinda Siriwardene, Shehan Jayasuriya and Akila Dananjaya having below average tournaments. Jayasuriya played all 10 games, but failed to make an impact, while Siriwardene and Dananjaya played 4 and 3 respectively. Mohammed Shiraz was another of whom much was expected, but he too failed to make an impact, playing just 3 games.  Afghan Hazratullah Zazai also couldn’t do much with the bat, making just 28 runs in 4 games.

Galle had their share of player withdrawals prior to the tournament, but apart from that of Lasith Malinga, one would argue that the presence of Colin Ingram and Sarfaraz Khan wouldn’t have made much of an impact on their fortunes. Malinga and Amir, would have been a treat to watch, bowling together and one can only imagine the chaos they could have caused. The departure of skipper Shahid Afridi was a major blow as the all-rounder had shown glimpses of some explosive form during his stay.

Duvindu Thilakaratne would perhaps have been disappointed to have not gotten a game after a stellar first-class season, but the Gladiators, in their defense, had plenty of bowling options to choose from.

Stars of the show

Gunathilaka was the standout performer for the Gladiators throughout the tournament and it is once he started getting some support that the team’s fortunes changed. With nearly a 200-run gap between him and Laurie Evans at no. 2 in the highest run-getter list, he was undoubtably the best batsman on show at LPL 2020. An unfortunate run-out in the big final may have cost him an opportunity to go to 500 runs and take his team closer to the title.

They say form is temporary, but class is permanent and Amir proved that, when he went from being taken apart by Andre Russell – going for 46 in two overs – to sparking the Gladiators’ revival with a fiery 5/26 against the same opponents. Amir bowled led the bowling attack with characteristic flare and was instrumental in their march to the final.

If someone had said that that Dhananjaya Lakshan would finish LPL 2020 as one of the highest wicket-takers, he would surely have been met with a derisive smile. But that’s exactly what happened. Known more for his batting, he made the ball talk in helpful conditions, his in-dipper to dismiss Dinesh Chandimal in the semi-final reminiscent of any of Nuwan Kulasekara’s best! But the youngster was given an opportunity to show what he can do with the bat and he did not disappoint, playing the calm finisher for the Gladiators in the semi-final.

Midway through the tournament, no one would have pegged the Gladiators as finalists but they got there thanks to some gritty cricket and playing as a team. There were lots of positives but, come season 2, they would hope they could have a less volatile journey.

Bowlers and DDS deliver a series-levelling win for Sri Lanka

Video – Can Sri Lanka finally win a series against India?...