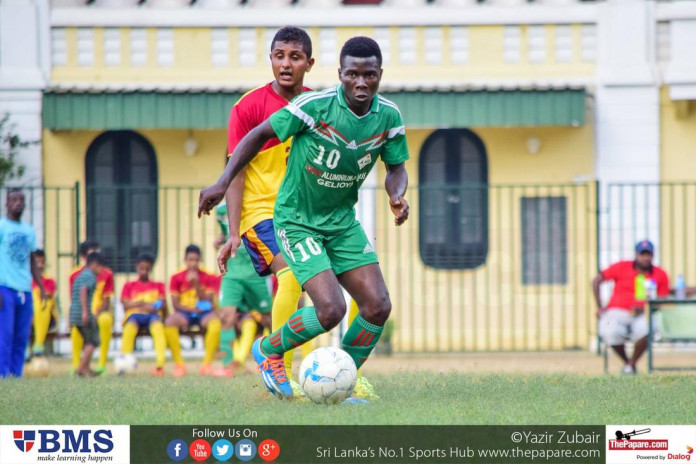 Mohamed Fahis scored a 10 minute hat-trick on his way to four 2nd half goals as Geli Oya FC thumped Young Marians FC 5-1 in the 2016 Premier League Division II encounter at the Bogambara Stadium.

In a rather lethargic opening the first half produced no goals but the 2nd half livened up as the fans witnessed six goals.

It was slow play from both teams in the first 10 minutes and neither team had a chance to score.

After that Young Marians’ forwards played some attacking football but Geli Oya FC goalkeeper T.Gunarooban and defenders didn’t give any chance to score.

The attacks were there for short time because Geli Oya FC forwards  came to attack with center forward Raju Sarvanraj getting some hard volleys from outside the box but all of them missed the cross bar.

From there onwards Geli Oya FC forwards tried to score but lacked the finishing.

In the 58th minute of the 2nd half Fahis started scoring for Geli Oya FC by placing the ball to the net over the visitors’ goalkeeper and it was assisted by Sri Lanka schools player Mujahid Ahmed.

Fahis struck again in 61st minute and scored his 2nd while in the 63rd minute Mohamed Sanher scored one for the Marians to make it 2-1.

Thereafter, in the 67th minute Odel Evens scored the 3rd for Geli Oya FC, taking advantage of some poor goalkeeping from Young Marians’ keeper. Fahis went on to score two more in the 68th and 79th minutes to complete the rout.