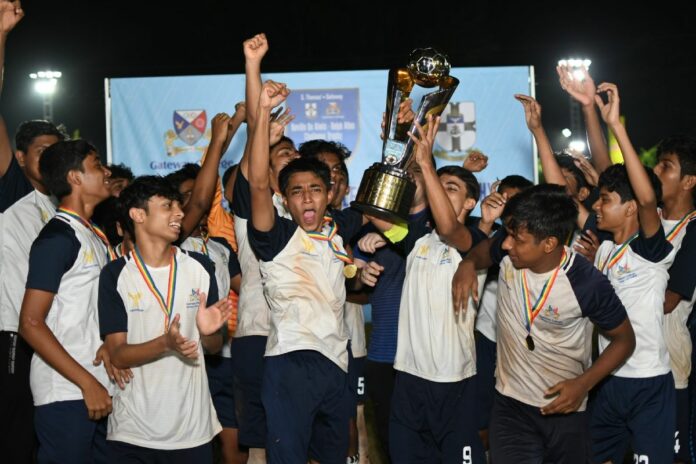 Gateway came into the match having won the first two encounters 5-1 and 1-0.

Rakesh Rathnasingham had the first opportunity for the Thomians when he shot on the turn, but it went just past the upright. Minutes later Samunu Kaggodaarachchi had his free-kick beat everyone and the goal, and went out for a goalkick.

Gateway took the lead in the 16th minute when Samithu Jayasinghe’s looping effort from a short corner out-foxed Shrestha Anthonisz and into the goal. The hosts had another chance, but this time Anthonisz was alert enough to rush forward and clear the danger.

The Thomians fought back into the game towards the latter stages of the first half. They nearly had the equalizer when Skipper Niven Nanayakkara curled in a delightful free-kick, only to see the ball go centimeters past the right upright.

Gateway had another chance to double the lead, but their counter attack was again thwarted by Anthonisz.

Rakesh Rathnasingham once again had a better chance than the first half, this time going one on one with goalkeeper Infas Iqbal, but was unable to make a proper connection at the decisive moment. Samithu Jayasinghe once again tried his luck with a long range free-kick, but this time it bounced off the crossbar, much to the relief of the visitors.

In the 59th minute, S. Thomas’ equalized when Gateway captain Alan Fernando headed the ball into his own net from a Mahith Perera corner. The celebrations were short lived as Gateway retook the lead from the restart, as Samunu Kaggodaarachchi finished off a brilliant flowing move.

The Thomians nearly made it 2-2 a minute later, but this time Iqbal made an excellent reflex save on the line to deny the visitors. Jayasinghe had a sour end to his brilliant evening when he was sent off near the end, but 10-man Gateway held on to make it a hat-trick of wins.