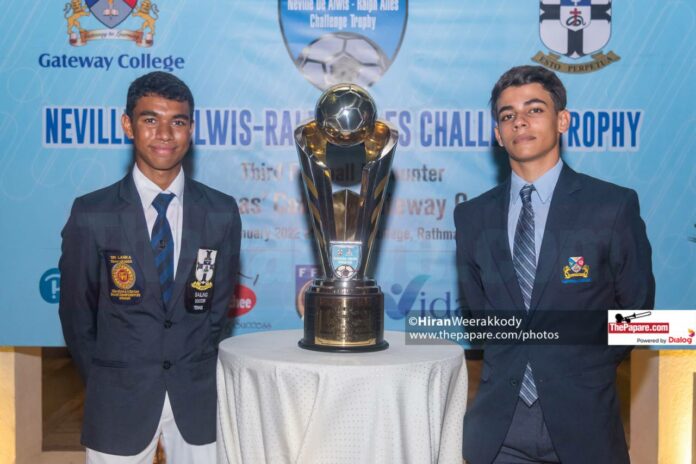 The stage is set for the 3rd Annual Football encounter between S. Thomas’ College and Gateway College, with both teams vying for the prestigious Neville De Alwis – Ralph Alles Challenge Trophy.

Named after two renowned educators, this trophy is a reminder of everything they stood for: camaraderie, sportsmanship, and equal opportunity.

The encounter will be played at the Gateway College Grounds in Ratmalana on Saturday 22nd January. The joint organizing committee confirmed that arrangements have been made to conduct an U16 and U20 match between S. Thomas’ and Gateway and a friendly Girls’ U20 game between Gateway and Overseas International School, Colombo.

S. Thomas’ old boys will also take on the Gateway old boys for the first time this year. Mr. Jaswar Umar, the newly elected President of Sri Lanka Football will be the chief guest and Ms. Premila Paulraj, Regional Director, Asia Pearson Edexcel will be the Guest of Honour.

Gateway lead the tally 2-0 having routed S. Thomas’ 5-1 in the opening encounter. The Thomians displayed a gallant performance in the last encounter but lost 1-0 with fortunes favouring Gateway on the day.

S. Thomas’ will be captained by Niven Nanayakkara and coached by Mohamed Siddeek while Gateway will be led by Alan Fernando and coached by James Heath.

Both S. Thomas’ College and Gateway College continuously strive towards the development of sports in the country. What these two schools invest in their sportsmen will not only benefit the individuals themselves, but also the schools they come from and the country they so proudly represent.

In its long history, S. Thomas’ has produced several world class sportsmen and despite being a relatively young school Gateway too has shaped a number of athletes, swimmers, basketball, netball and football players who have represented Sri Lanka and brought pride to Sri Lanka.