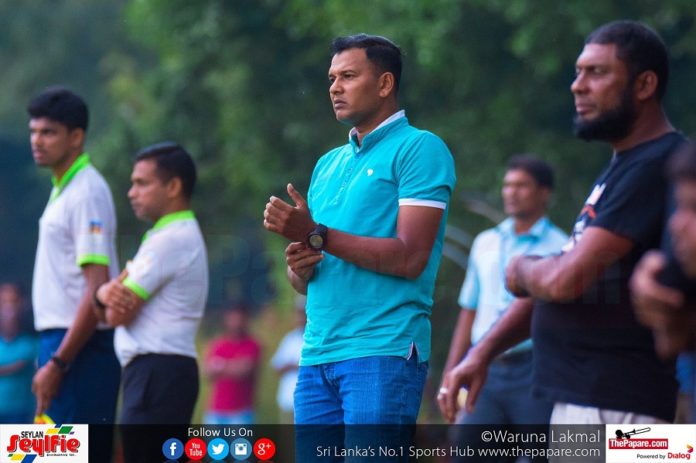 Mohamed Hassan Roomy was found criticizing the Sri Lanka football administrators and the structure for the dismal state of Sri Lankan football.

The former Sri Lanka National cap and current head coach of Colombo FC voiced his frustration in an interview conducted by Abdur Rahman on UTV. During the interview, he expressed his thoughts on the national team, schools’ football, current generation of players and how the players should adapt during the COVID-19 pandemic.

When questioned about the reasons behind Sri Lanka languishing in 206th in FIFA ranking, four places above last place, he had this to say;

“During our era, in the 1980’s and 90’s, Sri Lanka was placed 123rd in ranking. In 2000, we were 156th. Afterwards we were pushed back in ranking slowly while the other countries were trying to move forward.

Football Federation also should have a say because we didn’t have a proper football structure. We didn’t have a plan. We don’t have a Youth Development program. While the other countries are going forward, we are 30 years backward in football.

The reason for that is we are lacking in proper planning. If they plan only, our club level, school level, youth level and academy level will be structured properly. Till now I haven’t seen a proper plan.”

He went onto say that, although Sri Lanka taught football to the Maldives, they have come a long way and has surpassed Sri Lanka.

“If we must talk about that, we should talk much deeper. Maldives had a vision for their football. We will beat them with 8, 9 goal difference at that time. But they didn’t give up. Not only against Sri Lanka, they played against other teams and were defeated. But from each defeat they learned their weakness and corrected them. Because of the vision and the plan, they had, they fought for it.”

Not only did Roomy blame the administrators but he was also critical about the present generation of players. According to the FA Cup and three-time Dialog Champions League winner, players have not lived up to their potential.

“As a player who wore the national jersey and represented our country, I am very disappointed to see our players. The discipline of our players is also a problem. During our time we slept on time, had proper meals, we went to the practices on time and, we had a good discipline.

But now the discipline and homework from our players are very poor. That is the reason we are not playing well. If you wore the jersey and the boots, it doesn’t mean that you are player. A player should be self-prepared. Current players are lacking that. This is a very disappointing situation.”

Apart from being the head coach of Colombo FC, Roomy has also been the head coach of Royal College for the last couple of years. Having led his alma mater Zahira College to multiple championships, he was able to change the fortunes of Royal within 12 months. He has the distinction of having taken them to the final of the All Island Schools Division I in 2018.

“We should start from school level. From the home it should be taught. Kids should be taught the value of sports and the value of their lives. Most of them won’t teach these things. If we teach the kids about these values and how to balance both in their youth period, as a player, the chances of getting in the wrong direction will be less.

In Sri Lanka we don’t look at football as a profession, but football is a profession. If we can guide the players properly from their youth period, they will become a good professional. If we take a good look around the international football players, they are rich.

Roomy had some wise words for the current school and club players who are in the midst of a difficult period due to the COVID-19 pandemic.

“When we are staying inside our home, our body go out of shape. Our strength and flexibility may reduce, so we will be mentally down. So my advice to the players is to do any kind exercises like cardio, strengthening, on the spot running, skipping and core exercises. Those can be done in a small place at their home.

By doing that for at least 40 minutes for 3 days per week, a player can maintain his fitness level. That’s not a big deal. If a player is doing nothing in this period, after he increases his weight it might take 6 or 7 months to reduce his weight.

So that’s very tough for a football player. If he is only focusing on reducing weight for 6 or 7 months, his other skills and the performance will go down. It will be an easy task for a player to resume the training, if he maintains his fitness level.”

When asked if he had any ambitions on coaching a national team Roomy, who recently acquired the AFC A Diploma along with Mohamed Amanulla, had this to say;