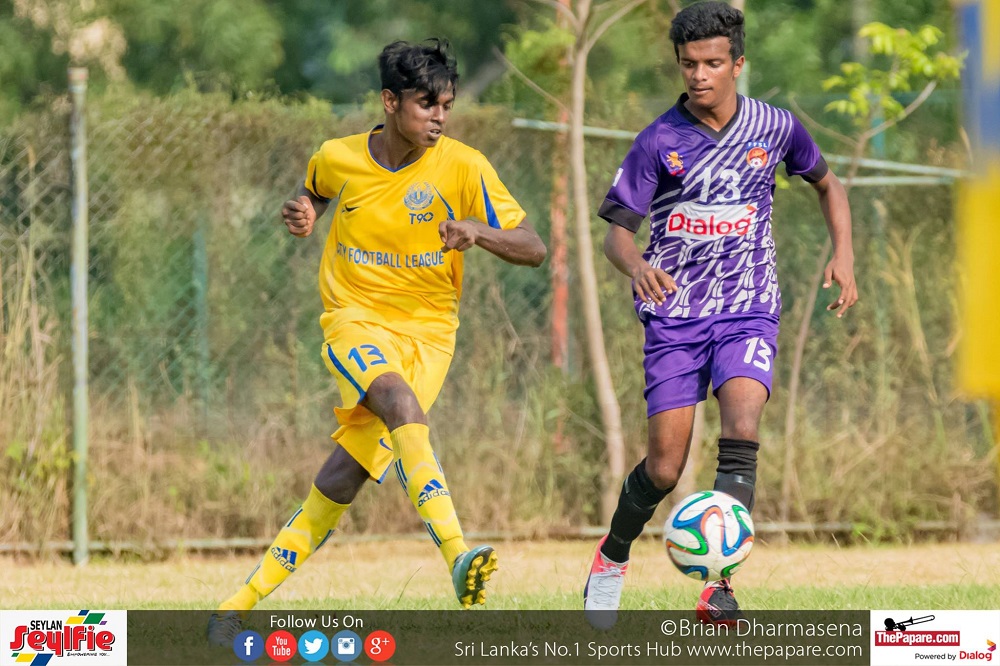 
A complete power packed performance from the Price Park boys assured them of a spot in the round of 16.

Saunders who ran on a goal riot in the previous round against Rathnapura Muncipal Council brought their form into this game, despite having a few players left out. Saunders Head Coach Sumith Walpola tried out new faces from the bench which proved fruitful.

Java Lane defeated Prison SC 2-0 in a hard fought and a tense affair while Saunders drowned..

Saunders wasted no time and took control of the match, dominating possession and pressing the Lions deep in their own half. Chryshantha Abeysekara had a couple of early chances to score the opener but was denied by great saves from Mohamed Luthfi.

In the 18th minute, a beautiful tiki taka move between Sanoj Sameera and Sundaraj Niresh created space for an unmarked Chryshantha Abeysekara to tap in to score the opener. The move was initiated through Indreewa Udara who played on the right flank.

Saunders doubled their lead 3 minutes later, when Abeysekara who paced in from the right cut in and lobbed a pass to Niresh who found the left corner of the net.

In response N.Rajapaksha tried his luck from a long range in the 30th minute which went wide, and the best chance for the Lions came in from Ireshka Wijesiri who missed a sitter.

Saunders scored their 3rd goal in the 43rd Minute. A corner taken by Udara from the right end found the tall center-back Rohana Ruwanthilaka. The former Sri Lanka Captain had no trouble scoring and gave a commanding lead going into half time.

Niresh continued his good form when he managed to dribble pass two defenders and took a shot at goal but was denied by Luthfi.

In the 55th minute Up Country Lions countered quickly with N.Rajapaksha receiving a through ball, went on to beat the goalkeeper Mahendran Dinesh but failed to score as his shot knocked the wood work. The continuous effort bore fruit for the Lions when the unmarked H.D.Chandrarathna scored which happened to be the only goal for the team from Nawalapitiya.

In a fiercely contested match, Civil Security SC defeated Old Mazenodians SC 3-2 in a 2016/17 FA Cup Round of 64 encounter…

Sameera executed a brilliant performance in midfield throughout the game. In the 67th minute an unselfish play from Sameera found Niresh to score a sitter.

Sumith Walpola brought in fresh legs to the park when he got in Zakeer Ahamed & Dineth Sankalpa for Ruwanthilaka and Udara. Zakeer and Dineth did not take long to make an impact.

In the 76th minute Saunders skipper Chanuka Eranga smashed in a thunderbolt teaming up with Zakeer Ahamed putting them up 5-1.

Up Country Lions were in shambles as their players looked tired and the bench had no substitutes to stop the humiliation.

Mohamed Ismath added the icing on the cake when he managed score the sixth from an assist of Pasindu Kavinda, which he managed to square the ball for Ismath.

“Having injuries in our regular line up, had to leave Dimo (Dumindu Hettiarachchi) & Shaheel. I used young players for today’s game to play with the experienced players, and especially I tried our substitute goalkeeper who represented the National U19 team played well. And we know this ground very well. We have played here so many times, and because of it we managed to play our normal game and beat them.’’