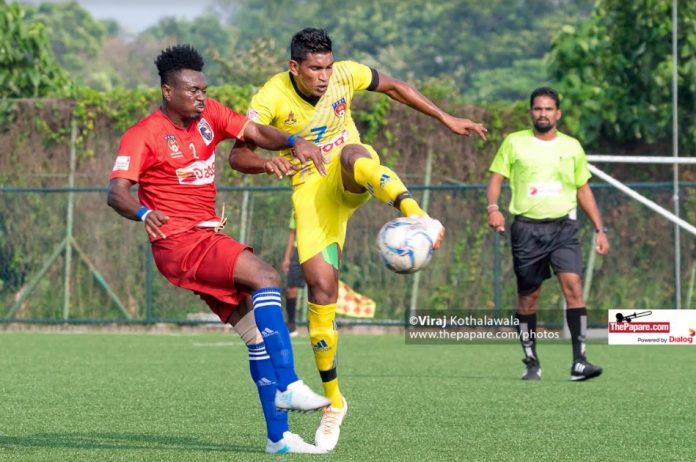 Defenders FC and Crystal Palace FC battled out an epic 3-3 draw filled with late drama in what should go down as a serious contender for match of the season at the Beddegana Football Complex.

Defenders FC came into this third week clash as favorites having won their two previous games, while Crystal Palace had just a draw and a loss in their first two games. Neither side looked convincing early on. Both sides missed chances with the Defenders’ effort being deflected wide, while Isaac Abba struck his shot just wide of the post.

Defenders struck first blood however after Y.L. Jayathunga struck a good cross into the box which was headed into the goal by R.J. Bernard past the diving goalkeeper Madushanka Jayatilaka. The soldiers continued on the front foot after going a goal up having a vast majority of possession in the first half, when they were rewarded yet again.

Veteran striker R.M.J.D. Rathnayake scored a hat trick and assisted another as he helped Navy Sea Hawks save their blushes…

Mohamed Issadeen struck a powerful shot from just inside the box which flew through the hands of Jayatilaka to double Defender FC’s lead, Jayatilaka should have done better on the occasion.

Jayatiilaka somewhat redeemed himself however when towards the end of the first half he pulled off two brilliant saves to keep Palace in the game. Palace meanwhile almost pulled one back when Abba was set through towards goal before he laid it off to S. Jayraj, whose first time finish was poorly scuffed wide.

Drama almost unfolded when Issadeen smashed in a cross and majority of his team-mates rushed to him to celebrate not having realized the flag had been raised for offside, and Palace looked to capitalize on the counter, but once again some poor attacking build-up saw the soldiers able to recover and rally in time.

Abba again almost pulled one back for his side but was well blocked with the rebound effort by Mohamed Shifan poorly struck wide. Crystal Palace showed some great skill on the ball, but a serious lack of attacking intent seemed to be costing them.

Asikur Rahuman had the chance to kill off the game for Defenders FC when he got the ball on the edge of the 15 yard box and had so much space to aim at, but good pressure by Jayatilaka saw Rahuman smash the ball over the bar, a missed opportunity that could have seen the game end so differently.

The Defenders seemed to have switched off late in the second half, and Palace capitalized when Abba brilliantly dribbled past his man and crossed into the box where Roshan Bathilet who had only come on a short while earlier, headed it in, giving Palace their first goal with their first effort on target.

The goal seemed to have given the lads from Gampola new life as minutes later Abba got a good through ball and dribbled into the box and smashed in a well-deserved equalizer.

Less than 120 seconds later a brilliant over the top ball to Abba saw Mohamed Luthifi rush to the edge of the box to poorly clear after which Bathilet’s effort was blocked away by Bandara Warakagoda, but a second attempt this time with a lofted finish had everyone beaten as it found the back of the net to give Palace the lead in a stunning turn-around.

Defenders early into the 8 minutes of added time pulled off a equalizer when Madushan De Silva with an absolutely stunning effort from the edge of the box curled and flew into the top corner.

Right  at the death, Abba found the net again when he intercepted a goal-kick inside the box and struck it in, but to the dismay of his team-mates the flag had been rightly raised as Abba had failed to exit the box before the goal-kick was taken. Mohamed Shifan was shown a second yellow and sent off for dissent after the incident.