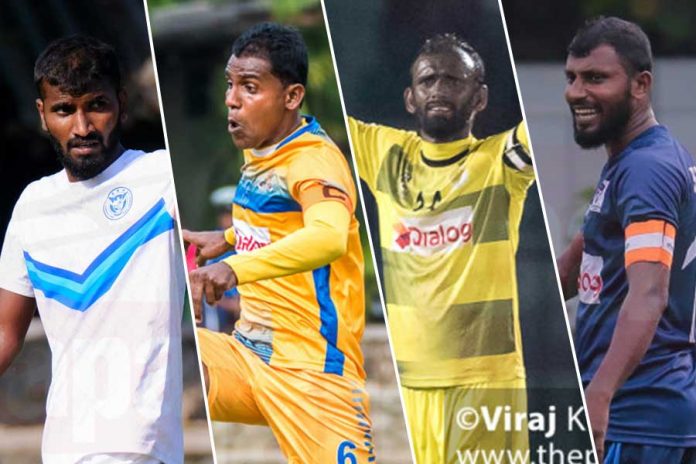 The Dialog Champions League 2018 title is on the line as the final two match weeks are upon us and four teams are all in the race for the Championship Title.

Super Sun SC Beruwela was punished severely by the ….

Navy Sea Hawks SC, Colombo FC, Blue Star SC and Defenders FC are all in the fray, so let’s have a look at the chances of each team. 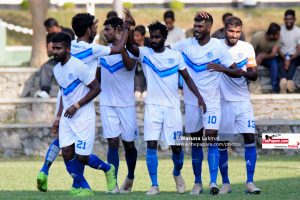 Currently the team leading the table with 30 points. A win against Saunders in the week 15 fixture would have strengthened their title credentials, however a last gasp winner for Saunders has given an opening to the other three contenders.

Sea Hawks have been consistently among the top 4 throughout the season. The first game was one to forget against Blue Star as they lost at home, but since then they have managed 9 wins and 3 draws, climbing to the top of the table.

The second loss came in the last match week against Saunders but Sea Hawks still hold on to the hope of winning their first Champions League Title.

Nagoor Meera, Mohamed Asmeer, Danushka Madushanka and Mohamed Shaheel have been their players who have delivered along with Chathuranga Sanjeewa and Subash Madushan whose experience has kept the Sailors afloat.

Sea Hawks will face Matara City in the penultimate game in Matara on 9th Feb in what is expected to be a very difficult fixture as Matara City has played well against all teams in their own back yard. A win will give the boost the Sea Hawks need for their final game against Colombo FC.

The game against Colombo FC could be the decider if Sea Hawks come away with the 3 points from Matara, but if they fail to do so, their title chances will depend on other results going their way. 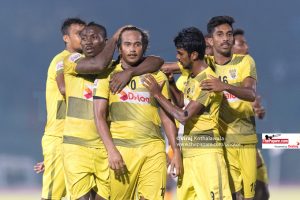 The title favorites at the start of the season purely because of the squad depth.  The season went as per plan up until the 5th match week when they were well beaten by the now relegated Negombo Youth 2-0.

From then on it was battle royal for the Colombo team with back to back draws squeezed in between wins decelerating their title defense bid as 10 points were dropped with 5 draws. Even the huge goal advantage was lost due to the disqualification of Super Sun SC which Colombo won 8-0.

Currently in second place on goal difference, Colombo FC will take on another title contender Defenders SC in the penultimate game week on the 9th Feb. A win against the Soldiers will be a huge advantage as the final game will be against table topping Sea Hawks.

Colombo FC will be hoping their star power will fire all cylinders come the last 2 match weeks. Bodric Dimitri up front is the leading goal scorer of the league with ample support coming in from Momas Yapo, Mohamed Aakib, Mohamed Fazal and Mohamed Rifnaz to name a few.

The experience of skipper Rawme Mohideen will be the biggest advantage as he has been there and done that on previous occasions.

The ‘dark horses’ of the season. Up until match week 11, the team was undefeated and was looking to create history finishing the league unbeaten.

Their title challenge was all but over following 3 back to back defeats at the hands of Matara City, Saunders and Red Stars but a win in their last encounter against Solid SC and the results of the other top 3 going their way has put the Blues back in the hunt.

Their penultimate game is a tricky fixture up in Kurunegala against Pelicans SC. If the Blues can come away with the 3 points, their final encounter could be a title decider for them. However they will need other results to go in their favour and hope Sea Hawks and Colombo drop points.

The final match of the season is against the much-fancied Defenders FC and should be a feisty encounter after the latter’s coach claimed the match against the Blues a confirmed 3 pointer for the Soldiers. It will be interesting to see how the whole episode will turn out.

Blue star will rely much on their foreign imports Ifeanyi Chimezie, Ebuzajnwa Chigozie and Uche Sunday all of whom have served the Kalutara team well.

The local players with experience such as skipper Mohamed Irshan, Mohamed Ajmir, EB Channa and goalkeeper Manjula Fernando will be their backbone.

The team boasting the biggest fan-following in the country will surely fill up the stadium come the final game if they are still in the title race or to see a win against the Defenders. 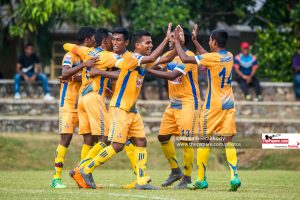 One of the most experienced outfits in the ongoing league campaign, Defenders FC were top of the table up until match week 12.

In search of the domestic double after winning the 2018 FA Cup, the Soldiers looked to be on track for the DCL 2018 title, but they hit a wall in the form of Red Stars who humiliated the Soldiers 5-0 and the last match week fixture against Up Country Lions too resulted in a heavy 5-2 loss. The only 2 losses the Soldiers faced this season were right royal thrashings.

Since the win against Air Force, the Defenders have gone into a slumber with 2 consecutive draws against minnows Pelicans SC and Negombo Youth. The game against Sea Hawks was a tough battle as they dropped vital points.

In order to win the DCL 2018, the Defenders must win both their fixtures, the first of which is against Colombo FC who too are in the challenge. A loss in the penultimate game to Colombo FC will send the Defenders out of the title race. Hence, it’s a must-win game for the Soldiers.

The match against Blue Star is the most awaited game in social media. Comments made by the Defenders coach Mohamed Murshid has stirred up the Kalutara fan base and a feisty encounter is expected irrespective of the title challenge.

Evergreen Mohamed Issadeen has been among goals for the Soldiers and will be hoping for another feather on his hat. The services of Asikur Rahuman and Bandara Warakagoda will have to be on their utmost to pull the title towards the Soldiers.

All four teams’ fates are in their own hands. The equation can get more complicated and complex with goal difference and head to head coming into play as well to decide the Champion.