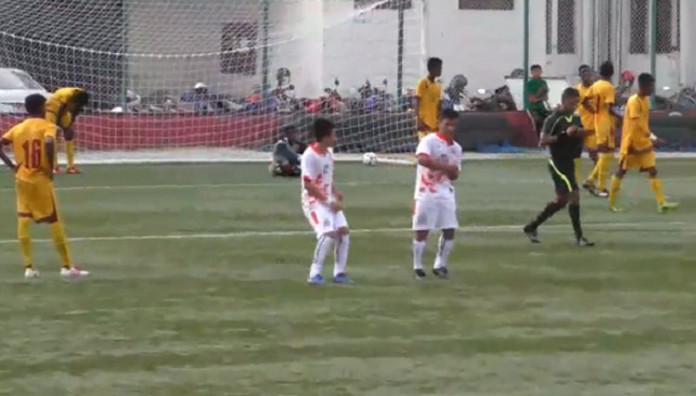 Bhutan demolished Sri Lanka 6-0 in their final group A match to book a semi-final place in the 2017 SAFF U15 Championship at the ANFA Complex in Nepal.

Sri Lanka coming off a 4-0 hammering at the hands of Bangladesh in the first match, needed to win this to make it to the semi-finals.

Ahmed Fahim scored a hat-trick as Bangladesh thumped a listless Sri Lankan side 4-0 in the opening..

However, Sri Lanka were unable to string together 3-4 passes at a go, much like their match against Bangladesh, as Bhutan dominated play with their slick passing. Bhutan were camped in the opposition half and in the 9th minute Dorji Khando gave the Bhutanese a well-deserved lead as he slotted past the goalkeeper from a through ball.

Khando doubled the lead in the 24th minute as a low cross into the box found him unmarked inside the six yard and he made no mistake in putting it in.

Once again Sri Lanka’s poor defending gifted the third in the 31st minute, when an un-cleared cross fell to Kinga Wangchuk, who from an acute angle sent the ball to the far corner.

Minutes later Bhutan’s wonderful passing game was on show and if not for the crossbar they would have got their 4th. Bhutan kept on toying with the Sri Lanka defence as a goal was disallowed for off-side and another from close range was saved by Ashaktha Mihiru.

Another swift passing move brought about the 4th goal with Kelzang Jigmi scoring in the 43rd minute. The superiority of Bhutan’s passing game was such, a 14 pass move almost resulted in a goal had the Bhutan player been able to keep it down.

Bhutan went into half time with the game in the bag as Jigmi scored the 5th in first half injury time.

With the game already lost, Sri Lanka went on an ultra-defensive role to stop the bleeding of goals. They almost achieved it but a 90th minute unmarked header from Siddharth Gurung off a corner made it 6-0 to complete the rout.

Sri Lanka lacked confidence and a plan from the onset and whenever they got possession most of the players tried playing all on their own without passing to the teammates who were in acres of space and were content on hacking the ball down field.