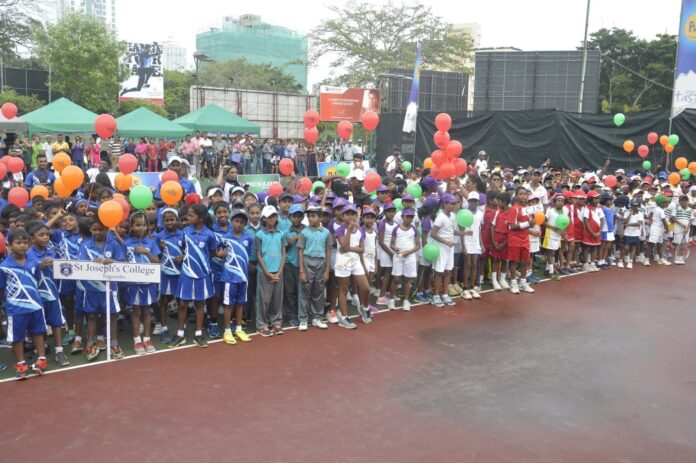 After a lapse of 2 years, the most anticipated Ritzbury All-Island Inter School Tennis 10s is back in town, this year it will be worked off from 4th to 7th November 2022 at the Sri Lanka Tennis Association [SLTA] courts.

The matches will start off at 8.00 am and will go on till 6.00 pm. Organizers of this tourney are expecting a participation of 1300 tennis players from all over the island, especially from Colombo, Kandy, Kalutara, Jaffna, Batticaloa, Negombo, Panadura, Galle, Kurunegala, Rathnapura and Gampaha.

The event will feature 3 age groups, Under 7, Under 8 and Under 10s. In addition to the main draw, to ease the pressure off the young minds, the organizers have planned some fun filled activities for the kids present at SLTA.

The prime motive behind this initiative is promoting sports within the upcoming generations, and to build up the enthusiasm from the grassroot level. It also allows the outstation players to get the exposure of something like an international tournament.

Mr. Suresh Subramaniam, Chairman of the Tournament at the SLTA expressed “SLTA is making great strides to play back-to-back tournaments to keep the players motivated around the year. This event is done mainly to empower the kids and to promote the sport of Tennis across the country”.

The organizers at SLTA along with their title sponsors Ritzbury Sri Lanka, has taken the initiative in awarding all the participants with trophies and Ritzbury gift packs.

Anjana De Silva, a well- seasoned individual in the local games over the years will act as the tournament referee and Chamila Iddagoda will take up the responsibilities as Tournament Director.

Ritzbury Sri Lanka has stepped forward to join SLTA as the Main Sponsor of the event while Sunquick, Eva and Perera & Sons will join in as Event Sponsors and 3G Sports will come in as the official Ball Sponsor.