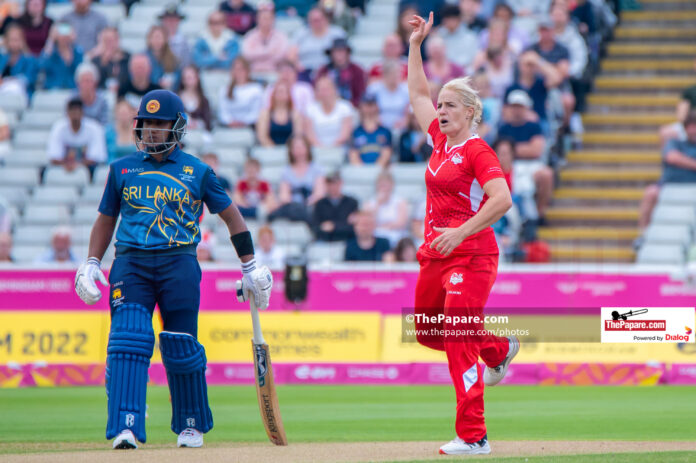 Sophie Ecclestone picked three wickets to lead the way for England as their bowlers set up the big five-wicket win against Sri Lanka at the Commonwealth Games. Sri Lanka’s decision to bat first didn’t yield desired results as Nilakshi de Silva’s 25 was the best solo effort for the side. Sri Lanka eventually limped to 106 for 9 in 20 overs which England chased down with five wickets and 17 balls to spare.

The damage to Sri Lanka began from the first ball of the fixture when Katherine Brunt had opener Vishmi Gunaratne trapped leg before. Captain Chamari Athapaththu too found the going tough as she and Hasini Perera slowly rebuilt, but only as far as the sixth over when the latter was dismissed. Sri Lanka struggled to stitch partnerships as Athapaththu fell soon after the PowerPlay and England kept chipping away. Sri Lanka didn’t just struggle at the hands of the experienced Ecclestone, but were also rocked by 17-year-old medium pacer Freya Kemp and 20-year-old quick Issy Wong – who combined to pick four wickets between them.

England’s start to the chase was almost as wobbly as Sri Lanka’s batting, but the latter didn’t have enough runs on the board to eke out a heist. England lost opener Danielle Wyatt in the second over and Sophie Dunkley in the fourth – both picked by Oshadi Ranasinghe – but Natalie Sciver and Alice Capsey kept them going.

Left-arm spinner Inoka Ranaweera dismissed Sciver and Amy Jones in the space of two overs but Capsey forged another stand, with Maia Bouchier to put the result beyond doubt. When Ranaweera picked her third by dismissing Capsey for 44, England needed just two runs to win. Bouchier got those in style with a four on the first ball of the 18th over to seal the game.