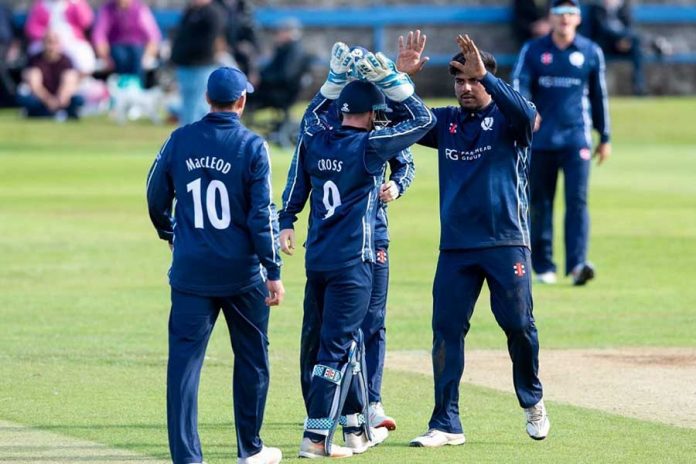 Hamza Tahir’s four-wicket haul was the key performance as Scotland eased past Netherlands by six wickets to take them top ahead of the final game of the tri-series against Ireland.

Though Hamza’s 4/30 was the starring role, ripping through the middle and lower order, Scotland shared the wickets around, with Richie Berrington accounting for the first wicket, having Max O’Dowd caught by Tom Sole, while Adrian Neill accounted for Tobias Visee before walking off injured.

Netherlands subsided for 123 all out and, after a shaky start, losing captain Kyle Coetzer to the seventh ball of their innings, Scotland made short work of the pursuit. Calum Macleod and George Munsey took them out of the powerplay without further loss, and while both fell within the space of 14 balls, a swift 53-run stand between Berrington and Ollie Hairs took the Saltires within sight of victory.

The latter fell with five runs still needed, having struck a pair each of sixes and fours in his 14-ball knock, but Berrington remained unbeaten as Scotland reached their target with six wickets and 6.4 overs to spare.

The result means Scotland top the tri-series table with eight points from three games, two points and a significant net run-rate difference ahead of Ireland, who will, therefore, need a big win to take home the title. For Netherlands, they will head into the Men’s T20 World Cup Qualifier with a solitary win from their outing, having knocked off a big chase in their previous game.