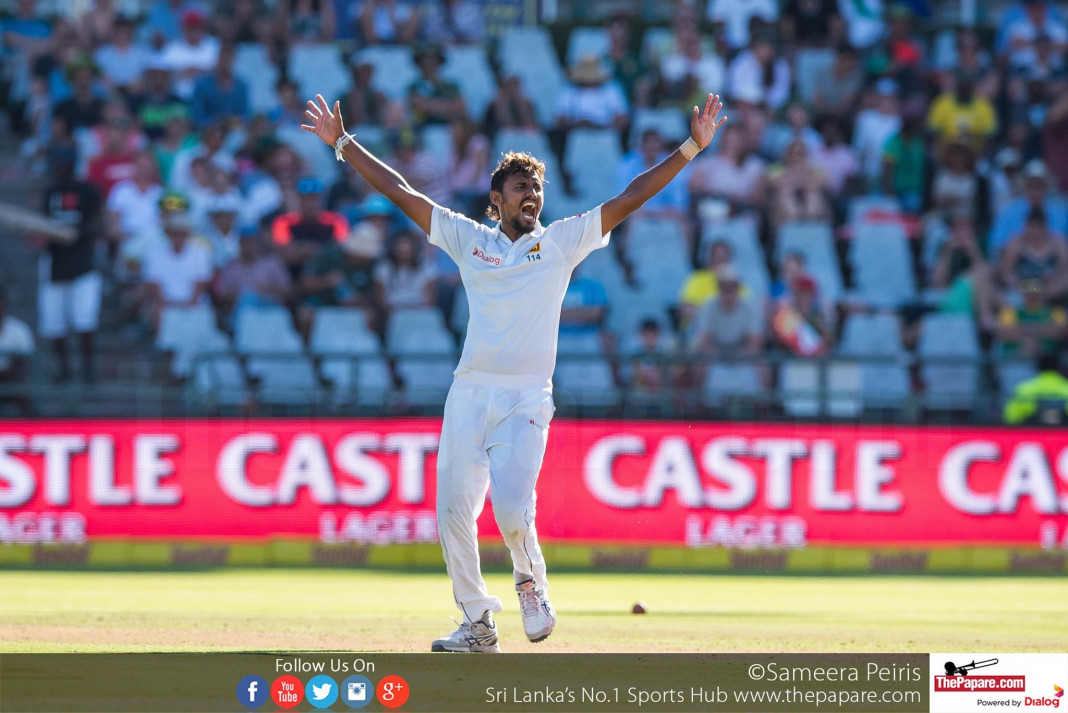 There are just a few positives for the Sri Lankans in the ongoing Test series in South Africa after repeated batting collapses. The tourists have failed to score 300 runs even once in the series while only two batsmen have scored half-centuries so far. One of the positives to emerge is the bowling of Suranga Lakmal.

The Hambantota born seamer, who will turn 30 in March, has tested the South African batsmen bowling long, tight spells and has been rewarded with 12 wickets in the series so far. He is the third highest wicket taker in the series behind Kagiso Rabada (14) and Vernon Philander (13).

Lakmal took four for 69 in the second Test in Cape Town and prior to that claimed his maiden five wicket haul when he picked up five for 63 in the first Test in Port Elizabeth.

Lakmal’s talent was spotted by Sri Lanka Cricket’s coaches while he was still at school and they fast tracked him to the senior side. His height which enables him to get bounce and his ability to swing the ball impressed the coaches and Chandika Haturusinghe, one of the brilliant spotters of talent, earmarked him and Angelo Mathews for greatness after Sri Lanka ‘A’ tour of South Africa in 2009.

Since making his Test debut six years ago, Lakmal had bowled decent spells, but had failed to make a big impact. Taking over the captaincy at Tamil Union would have helped, but more importantly, technical adjustments to his action proved vital as did a red notice from the selectors.

“I made a small change to my action. I watched a few of my old videos with the coach and analyzed it in Sri Lanka. I practiced the change at home and when I came here, I found I could swing the ball more. That’s the difference,” Lakmal said.

“My arm had been coming round-arm a little earlier. I’ve worked on that and straightened it up now. The ball hits the seam more often now, and it can go either way from there,” Lakmal added.

While Rabada has clocked 145 kmph plus in the series, Sri Lanka’s Lahiru Kumara and Dushmantha Chameera  both bowled above  140 kmph in the series.

Lakmal has been much low on pace, but the ability to swing the ball has been the key to his success.

“There has been not much of a difference with my pace. I have never bowled very fast. More than the speeds, it is the movement that the batsmen find it tough to play. So the ability to send the ball either way is important. I’ve worked on the control as well, and that has led to wickets.”

It has been Lakmal’s most successful series by a mile. Lakmal admitted that he had been cautioned by the selectors prior to the series.

“I had a big challenge when I came here, because there was a little pressure from the selectors and the board. I’ve been in this team as the senior bowler for a while, and I don’t just want to live off that reputation. That’s not fair to the younger bowlers in Sri Lanka either. I thought that if I didn’t do well in this series, maybe I wouldn’t be in the Test team anymore. I don’t want to hear anything bad about my bowling, as I’ve given 100% everywhere.”

Now that he has been able to achieve some of his goals, Lakmal wants to raise the standards higher. “As a goal I had set myself 15 wickets in the series before I came here. I told the coaches that as well, and thought I would have had a successful tour if I could achieve that. Now I’ve got 12 already, so I’ve raised my target to 18 or 20 wickets. Hopefully I’ll get there.”