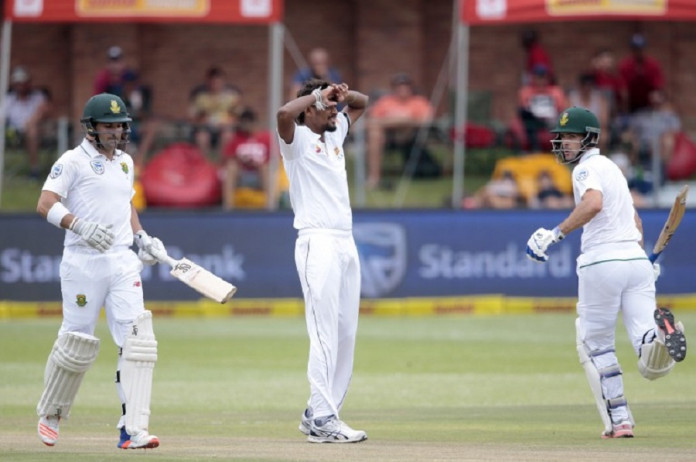 Despite Sri Lanka facing a tall order to save the first Test against South Africa, fast bowler Suranga Lakmal was positive that his team would chase down any target.

South Africa finished day three on 351 for five and lead by 432 runs with two full days left in the game. Sri Lanka has never scored more than 342 in South Africa.

“We actually want to go after whatever the target that is given to us. We have two full days and we are well prepared and determined to chase even 500 runs,” Lakmal told journalists.

When reminded that no team in the history of the game has successfully chased more than 418 runs to win a Test match, Lakmal said that records are meant to be broken.

“The wicket is completely different. First two days it helped fast bowlers, but now it’s is flat. Any game can be changed. We know 500 runs will be tough. But if two batsmen get set, I don’t think even a 500 run chase is tough. We will give our best shot,” Lakmal added.

Sri Lanka’s highest successful run chase ever is when they made 352 against South Africa in 2006 at P. Sara Oval. Sri Lanka seem to be getting inspiration by the recent Gabba Test where Pakistan nearly pulled off a miracle chasing 490 before falling short by 39 runs.

Opening batsman Stephen Cook slammed his third ton for the calendar year to put South Africa to the driver’s seat in the first Test against Sri Lanka after third day’s play at St.

Sri Lanka could have restricted South Africa to a lower total with a more disciplined effort on the field. Two catches and a stumping chance were missed as the Proteas scored at 4.3 runs an over.

“Any team will make mistakes. These are part and parcel of the game. Things could have been different had we hold onto those chances, but these things happen in cricket.”

Lakmal, who claimed his first five wicket haul in the first innings, said a few technical changes he had done helped him to swing the ball better.

“This is my first five wicket haul. I enjoyed it. The last two weeks I have been doing some hard work. The coaches have been helping me to work on my grip and I am happy with the swing I was able to get during the first innings. I altered my action a little bit before I came to South Africa. I watched some video and changed it and practiced it a lot.”