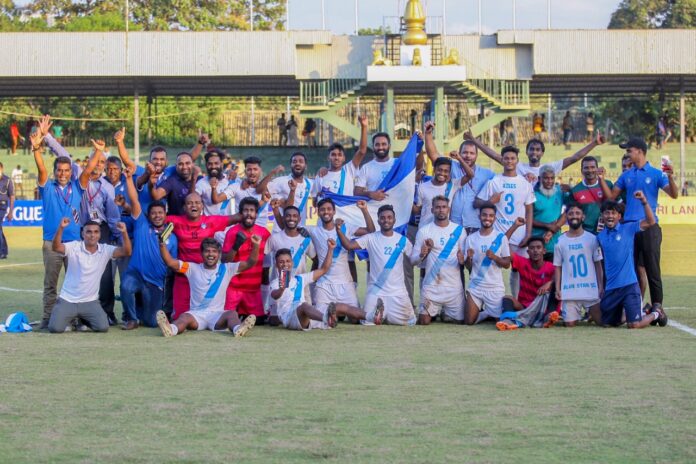 Resolute 10-man Blue Star defeated Blue Eagles 3-2 to be crowned champions of the inaugural Super League at the Sugathadasa Stadium.

Coming into the final game week, both Colombo and Blue Star were equal on points (19), setting up two championship deciders.

Table toppers, Blue Star, playing against bottom of the table, Blue Eagles, proved to be a dramatic affair.

Mohamed Fazal opened the scoring for the Kalutara lads in the 11th minute and Mohamed Arshad doubled the lead three minutes later, sending Blue Star well on their way to the championship. Unfortunately, the latter picked up a yellow card for removing his jersey while celebrating.

A later Lasitha Fernando pulled a goal back for Blue Eagles, and in the 34th minute Arshad was sent off for a 2nd bookable offense. That saw Blue Star forced to play the remaining 56 minutes with just 10 men and gave the Eagles the opening they needed as Nethma Malshan equalized in the 39th minute. The sides went into Hal-time on level footing at 2-2.

Blue Star showed what their young squad is made of, displaying brilliant football, control and maturity as Mohamed Ihsan put the cherry on top with the winner in the 83rd minute, to help Blue Star claim their first championship in 16 years.

Colombo needed a win and for Blue Star to lose or draw to have an opportunity to win the championship. They started off well, scoring the opener through Mohamed Aakib in the 15th minute.

Subash Madushan equalized in the 37th minute as both sides went into half time 1-1. Mohamed Hasmeer gave Sea Hawks the lead in the 65th minute before Chathura Ponnamperuma got his 2nd yellow in seven minutes, reducing the sailors to 10 men.

However, Avishka Kavindu finished off a wonderful counter attack in the 76th minute, leaving Colombo with quite a mountain to climb. Momas Yapo made it 3-2 in the 87th minute but it was too little too late for Colombo.

With the win, Sea Hawks finished with 19 points, equal to Colombo, but with the better head-to-head record against Colombo, they moved to 2nd place.