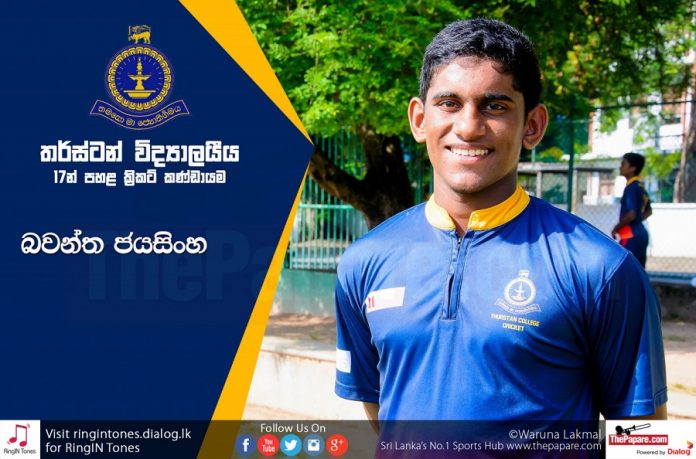 The first-round fixture between St. Benedict’s College and Devapathiraja was played at the MRIS, Hambantota yesterday (25th) and today (26th) September. This was one match among the many games that commenced today as well.

Winning the toss, St. Benedict’s College decided to field first. Devapathiraja did not bat up to standard and ended day one on 171 runs for the loss of 7 wickets. Resuming their innings on day two, they managed to get to the two-hundred run mark ending their 1st innings at 206 in 85.3 over’s.

Thisara Dilshan top-scored with a half-century and Sudeera Weerarathne made 48. Mystery spinner Maheesh Theekshana worked his magic to pick up 4 wickets. Even though the lads from Rathgama couldn’t keep the scoreboard moving, they made sure they batted long as possible taking their time.

Two matches of the Singer Schools ‘Under 19 Division 1’…

In reply, St. Benedict’s were clearly looking at a tame-draw, but struggled with the bat. St. Benedict’s were 162 for 7 when the umpires called stumps. Hasindhu Kavirathne scored 45, while Kaveesha Jayathilake, Sanoj Perera, Pasan Suwahas and Maheesh Theekshana got to double figures. Pathum Madusanka was the pick of the bowlers with 3 for 36.

The game came to a tame draw without either of the teams even taking first innings points.

The toss was won by St. Anthony’s and the skipper opted to field first, due to the rain in Colombo the previous night. For Thurstan, Bawantha Jayasinghe took the wheel and steered them to a comfortable 248 with a fine knock of 107. Shalaka Bandara’s made 28, while Ashen Malith picked up 5 wickets.

The drama unfolded when the Antonians came out to bat. In a span of 15 over’s, the Antonians managed only 10 runs loosing 6 wickets. Bawantha Jayasinghe struck with the ball picking up 2 wickets for 5 runs, while Sandaru Dias also picked up 2 wickets without leaking a single run. St. Anthony’s were in all sorts of trouble at the end of Day one at 10 for 6. Play will resume tomorrow (27th) at 9:45 am.

Aloysius opted to bat first after winning the toss. A below par performance by the Aloysius lads saw them bundle out for just 168 runs. Kavindu Dilhara top-scored with 36 runs, while Chethaka Denuwan picked up 4 wickets for 30 runs.

Two matches of the Singer Schools ‘Under 19 Division 1’..

St. Servatius College was 71 for 3 at the end of the day with Risira Lakwin and Chihan Kavindu both on 22.