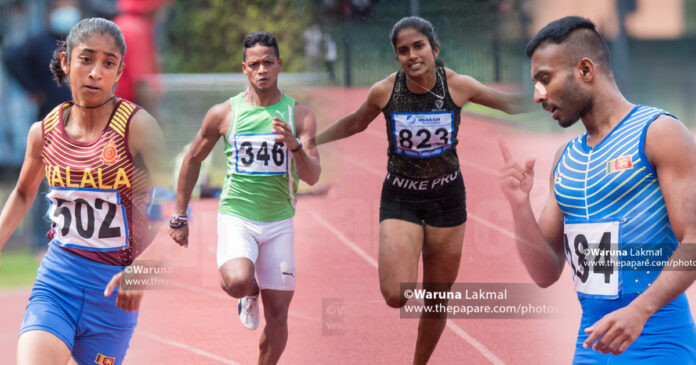 The final day of the 100th National Athletics Championship finally got underway today (23) at the Diyagama Mahinda Rajapakse stadium, after hitting a bit of a snag from earlier this month.

The centenary celebrations of Sri Lanka Athletics got underway with its 100th National Athletics championship was originally scheduled for the 8th, 9th and 10th of April. After two successful days of action, heavy rainfall stalled the third day which also pushed out some major finals from proceeding.

A week of celebrations for the Sinhala and tamil avurudu festival later and the third and final day got underway in Diyagama with the 100m and 400m finals along with the Men’s 1500m and the field events.

It was a busy finish in the Men’s 100m finish line, but it was Yodhasinghe who clocked in first at 10.50sec ahead of K N Chathuranga who finished second with a time of 1.60sec.

Tharushi Karunaratne and Kalinga Kumarage impressed with their new National titles in the Women’s and Men’s 400m finals. Karunaratne clocked in 53.85sec while Kumarage edged out Aruna Darshana by the smallest sliver with a timing of 45.88sec as opposed to Darshana’s 45.90sec.

>>Click here for the results sheet of the final day

Roshan Dammika won the Duncan White challenge trophy for being the best hurdler of the meet in the Men’s category while Kaushalya Madushani won the Women’s Hurdles challenge trophy, the Glucolin Challenge Trophy.