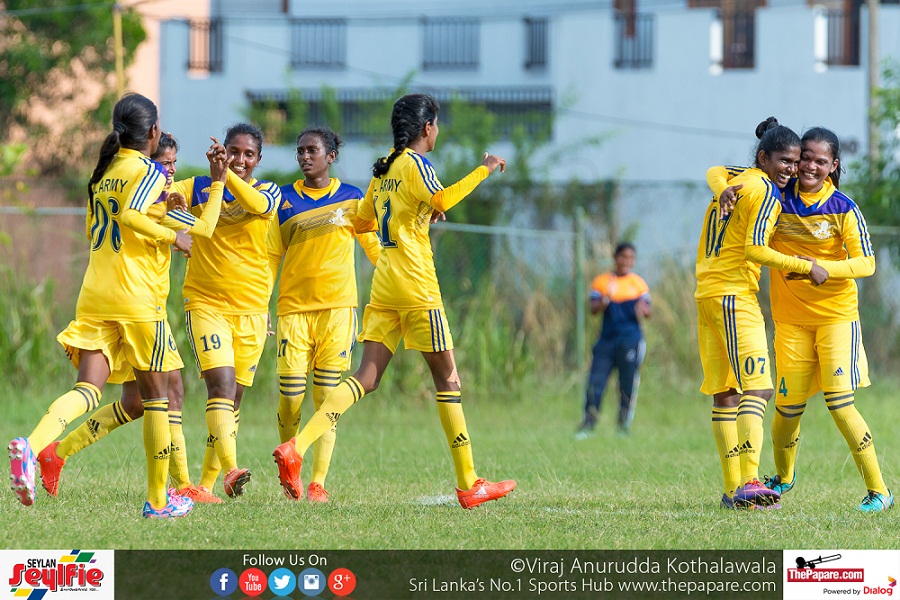 Army SC dominated a10 woman Air Force team to grab three points in a 1-0 win, in a Women’s Premier League division I encounter worked off at Kelaniya football complex.

Both teams started off with quite a bit of intent as they pushed their opponents in midfield. Air Force had a few early openings which they failed to capitalize on as Army were given a window to put their foot into the game.

Despite that the lady Soldiers managed with what they had as the game turned rather scrappy. With time however Army grew in confidence as they managed to string a few clinical passes going forward. The end product is what lacked to show for their efforts as they kept knocking on the Air Force door.

Navy and Air Force share the spoils in a dull affair:

Navy SC women and Air Force SC women shared the spoils in a subdued game which ended 1-1, in a Premier…

The first clear chance of the half fell to the Air women as a corner was eventually cleared off the goal line in a real scramble. That brought the Army women to life as they once again pressed to take charge of the game. One such effort gave the opening for them to break the deadlock as E.K. Liyanage scored from a tight angle off a blistering free kick.

The Army ladies went on to dominate the remainder of the half carrying themselves into lemons with a one goal cushion.

The game took a rather dull turn in the wake of the second half as both sets of players showed signs of fatigue. The game opened up when T.K.Anjala was cautioned for a second bookable offense which resulted in a red card.

Army went on to dictate terms with the numerical advantage in hand. E.K.Liyanage and N.C.Karunarathna dominated the Air Force defence from moving forward as Army were relentless in offense.

Despite being unable to double their advantage Army carried through their pressure till the final.whistle as they managed to secure all three points in a narrow victory.

Speaking to ThePapare.com the coach of Air Force Iroshan T. Hapuarachchi “We came here for a result and it’s disappointing to lose. The fact that we lost a player in the second half didn’t help us as it made our job tougher. But we’ll improve and face our next game much stronger”

Speaking to ThePapare.com the coach of Army N.A. De Silva “I’m thoroughly satisfied with the performance. The team played well together especially the forwards and we want to carry on playing the same way in future as well”