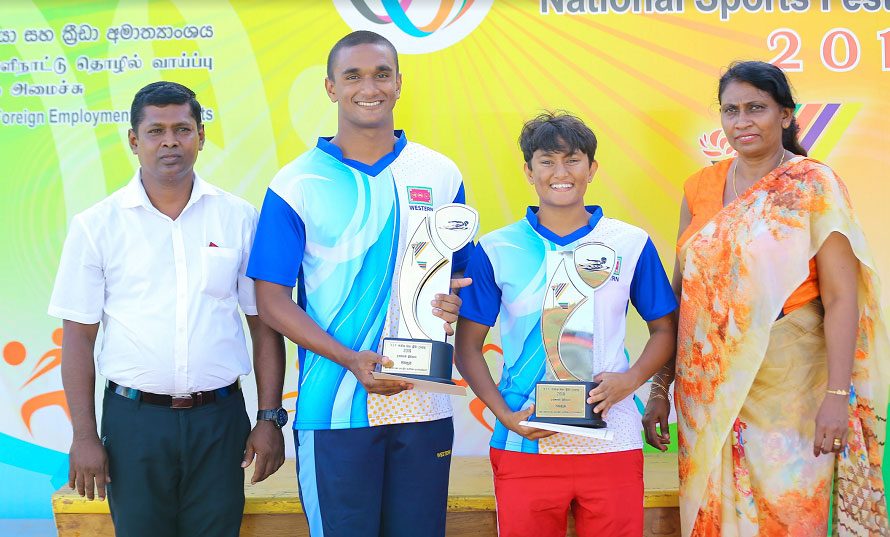 A total of 16 records were established at the 45th National Sports Festival Games, which was held over the weekend (6th & 7th July) at the Sugathadasa Indoor Swimming Complex.

Five provinces competed at the annual event this year with Western Province pulling ahead by a mile. Western Province topped the combined medal count with 64 total medals at the end of the 2nd day.

In the Mens 100m Backstroke, Peiris already held the record at 59.55seconds. At this years’ meet, Peiris clocked in 59.11seconds in his final lap to renew his record.

Akalanka’s 3rd and final record came in the Boys 50m Butterfly event which was already in his name since 2017. His final timing clocked at 25.27seconds renewed the previous timing of 25.38seconds.

Ramudi Samarakoon of Visakha Vidyalaya too, had a stunning meet this year, with 2 meet records to her name in the Women’s 50m and 100m Breastroke events. Both her achievements were renewals of her own records at the meet.

She clocked in at 35.24seconds in the 50m Breaststroke where her previous record was 36.40seconds. Her final timing in the 100m Breaststroke read as 1:17.08 min, marking her second Gold and record at the event.

Dilanka Shehan, Dilrukshi Perera and Sandu Savindi eached finished with 2 records to their name in their respective events. N M Perera, Sandev Senarathne and Shevinda De Silva also managed to mark 1 record each to their names.

Akalanka Peiris, Sandev Senarathne, K C Dalpathadu and Shevinda De Silva teamed up in the Men’s 200m Medley Relay to establish another record by a solid margin. The previous record, also held by Western Province, was swum at 1:53.05min. Setting a new record, the 2019 quartet finished the race in 1:51.43min.

Dilanka Shehan, K G Silva, Sandev Senarathne and Shevinda De Silva also teamed up to establish a new meet record in the Mens 200m Freestyle Relay with a timing of 1:41.73min. The previous record was held at 1:42.02min by a team representing Western Province.

With 15 points each to their names, Akalanka Peiris and Ramudi Samarakoon were given ‘Best Swimmer’ awards in the Men’s and Women’s categories respectively.