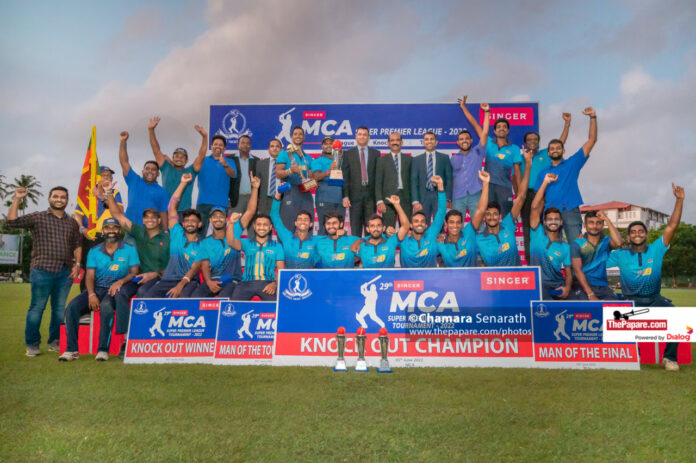 The final of the 29th Singer-MCA Super Premier League 2022 was played today between John Keells Holdings – A v Hatton National Bank at MCA Grounds, as the latter crushed their opposition to clinch the title.

HNB skipper Madhawa Warnapura was the star of the day as he bludgeoned an unbeaten 32-ball 86 chasing 219 in 30 overs while his partner, opener Kasun Abeyrathne cruised to 88 from 79 balls. Warnapura’s rapid innings was decorated by seven sixes with as much boundaries as he took down JKH bowlers one by one.

Earlier in the day, HNB won the toss and asked the opposition to bat first in the rescheduled 30-over match and managed to restrict the opposition to 218/6 in 30 overs. Dilshan Munaweera starred with the bowl as he bagged 3 wickets while skipper Warnapura and Raveen de Silva contrinuted with one each.

For JKH, Sadeera Samarawickrama hit a half century as he pushed more than a run-a-ball but it was and Sachitha Jayathilaka who provided the much-needed impetus to the innings with six sixes in his 63. At the latter part of the innings, young Ahan Wickramasinghe’s made a invaluable cameo of 11-ball 26 as it helped JKH reach 218 for 6.

At the end, that total proved to be not enough as the HNB batters chased it down within 27 overs thanks to Warnapura-Abeyrathne’s unbeaten partnership of 126 in just 59 balls for the fourth-wicket.